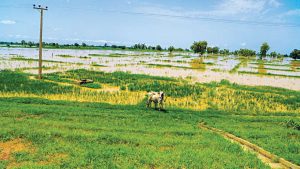 The lawmakers representing Kebbi State in the House of Representatives, on Tuesday, revealed that the state had lost an estimate of N10 billion to flood disaster which recently ravaged some parts of the state with many areas submerged. Recall that the Nigerian Meteorological Agency had forecasted that some parts of the country will experience flood and Kebbi state, happens to be among the states forecasted to be hit by flood this year.

While speaking with journalists in Abuja, the Kebbi representatives in the House led by the Chairman, Muhammad Jega said the flood has created a serious setback towards addressing food security in the country as Kebbi contributes 60% to rice production in the country.

The lawmakers said the government needs to address the shortfall of the food supply chain to reduce the hardship and cost of food items in the market by assisting the farmers in the state through adequate and early preparation for dry-season farming and reconstruction of major infrastructure affected in the state.

They commiserated with the government and people of Kebbi state over the flood disaster that has ravaged the entire state being the focal point of the Federal Government policy for rice production in the country. The Kebbi representatives also urged the Federal Government to commission a study with the aim of providing a lasting solution to the perennial flood disaster in the state.