Fish canning: – is a process involving heat treatment of fish in sealed containers made of tin
plates, aluminium cans or glass, until the product has been fully sterilized.
During caning, heat treatment should be sufficient to destroy all heat sensitive bacterial and
spores, inactivate, the enzymes and cook the fish so that the product remains acceptable to the
the consumer after prolonged storage i.e. commercialized sterilization this is used in thermal
processing to describe the heat treatment designed to kill substantially all microorganisms and
spores which are present and cable of growing in the product.
The canned food fish is also prevented from contamination by pathogenic organisms by storing
them in a virtually airtight package. If heat treatment is properly carried out canned fish may
remain in storage for several years without refrigeration.
Excessive heat treatment or over-processing must still be avoided, as this will adversely affect
the organoleptic and nutritional quality of the fish. Traditional canned fish are obtained from
small pelagic fish species such as herrings (Clupea spp), Sardines (Sardinella sp), Mackerels
(Scomberomerus sp), Anchovies (Engraulis sp), Tuna (Thunnus sp). Bonga (Ethmalosa sp).
Fish intended for canning must be in first-class condition and must be handle in a hygienic manner
to reduce microbial load on the fish. Poor quality fish will produce canned fish with offensive
odour and flavour, poor texture.

Fish mince: – this can be defined as flesh separated in a form, from the frames,
scale, bones and fins of fish. Fish mince can be prepared either mechanically by the use of flesh bone separator or non-mechanically.

Mechanical preparation: – a flesh/bone (or meat/bone) separators also called Deboning machines can be used to retrieve flesh attached to bones and frames of fish and thus make them better utilized instead of discarding them as a waste. Prepared fish by removing the head, skin, bone, internal organs such as gut, kidney, liver, air bladder and blood vessel before passing it into flesh/bone separator. When these prepared fish are fed into d machine it is squeezed between the feed belts and perforated drums in such a way as to allow only flesh to pass through, while the bones and skin are collected separately.

These are utilized thus maximizing the profit from the landings and fish is still made available cheaply to the consumers.
There is a non-mechanical method of preparation but if not properly handled it can result in off flavour. It involved the use of acid and end product may have rancidity or autolysis.
Minced fish is obtained from filleting leftovers to headed and gutted fish using a bone/flesh
(meat-bone) separator to remove bones from the edible flesh. Fish mince is very versatile and can be used to make a variety of products such as fish portions, fish fingers, fish cakes, fish sausage and fish cheese.
Surimi is a wet concentrate of proteins of fish muscle that is mechanically deboned water-washed fish flesh. It is prepared from marine fish. Minced fish is cooled water-washed to remove fat and water-soluble components. 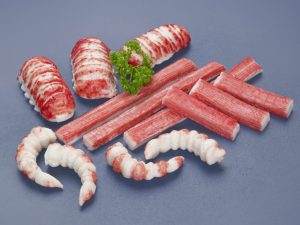 The end product is frozen and is used in the preparation of diverse fish foods such as Kamaboko, Tempura and Chikwa (Japanese Surimi based products) fish sausage fish ham, fish stick, fish balls hamburger.
Difference between minced fish and surimi is that while minced fish is the fish flesh which is separated from bones and skin (usually mechanically) surimi is prepared after minced fish have been washed in water to remove fat and wet soluble components.


Post Views:
7
Previous articleTERMINOLOGIES USED IN POULTRY PRODUCTION
Next article3 SECRETS BILL GATES TAUGHT ME THAT CAN MAKE ONE SUCCEED IN FARMING