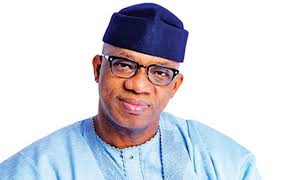 The governor of Ogun State, Dapo Abiodun has promised that his administration will help small holder farmers and those in the agriculture value-chain businesses to boost food production.

The governor who was represented by Dr Adeola Odedina, the Commissioner for Agriculture made the assertion while inaugurating the lock-up and open stalls and a solar powered borehole at the Olugbo Market in Odeda Local Government area.

He said the gesture was a drive to ensure infrastructure development at the grassroots. That the facilities were built by the state government, in collaboration with the Federal Government and International Fund for Agricultural Development (IFAD).

Abiodun listed other laudable projects completed by his administration, through the Federal Government and IFAD to include boreholes, road constructions, input distribution and linkage with off-takers.

Also Read: DIRECT TO CONSUMERS IS THE WAY

The governor said that the facilities were meant to boost the livelihood of small holder farmers and marketers of farm produce at the local government, that markets with modern facilities were necessary for farmers to keep their produce.

The IFAD State Project Coordinator, Mr Samuel Adeogun, in a remark, urged the farmers to ensure that the facilities and the environment were kept clean and also urged the traders to maintain the facilities, saying that it would boost their sales and increase their profits.

Speaking at the inauguration, the Transaction Committee Chairman, Odeda Local Government, Alhaji Semiu Lawal commended the governor for ensuring food security in the state through his various agricultural programmes, that the facilities would improve productivity of farmers and encourage them to leverage on the government’s aids to improve food production.

Previous articleAPPEALS Collaborate with ALF to train 250 Farmers
Next articleBIOSECURITY IS THE WAY OUT, SAYS CHIEF VET OF NIGERIA