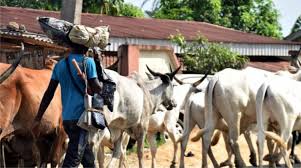 In a bid to stop the menace of Fulani herdsmen on Yorubaland, the villagers at Papa Baale, Tologboni, Ogbaagba, Tao sheesh, Teseyin, Tejoowo, Titaliwo, Filele area of Ijebu Igbo call on Ogun State government to come to their aid and curb the inhumane acts of the herdsmen in distroying their crops which in no doubt would lead to chaos and unrest in the area, if the situation is not addressed with immediate effect.

According to him, farmers at this axis had gone extra miles to obtain loan from banks and invest such in agriculture adding that the herdsmen have on several occasions reared their cows and destroyed their farm produce.

READ ALSO: See The Interview Exposing The Great Threat On The Existence Of Poultry Industry In Nigeria and the way out

“The funny thing is that when the police followed the farmers to arrest and detain, shortly they released them to their Seriki and promise to pay certain amount, they eventually, drag their Cow back to the farm and finished whatever was left on the farm claiming they have paid for everything, the idea of having Maize to feed fowls and human consumption is again in jeopardy because what is happening in Ijebu North Local Government to Maize farmers is alarming, as it happens everywhere in the State.

It seems Police efforts to curb their activities are futile as they bragged that, if they are locked up, they would regain their freedom and come back to meet farmers on their farms”, Akeusola said.

He explained that, their actions have caused untimely death to many farmers recalling that sometimes ago, Alh. Tayo, Chairman, Rice Farmer’s Association, from Ago Iwoye, slumped and gave up the ghost as he heard of Cow eating up one of the biggest Rice Farmlands saying Mr. David Adetayo, Chairman, Maize Farmer’s Association, whose farm of Maize and Watermelon plantations were raised down by the activities of herdsmen on his farm .

Akeusola explained that the Fulani Herdsmen had been clogged in the wheel of Agricultural progress in the Local Government making reference to 2017 when Senator Adegbenga Kaka brought a Cassava project through British American Tobacco Company (BANTC) who funded the Cassava 419 species, it would have been a laudable one but all the efforts of the farmers involved were thwarted by the Fulani Herdsmen.

” In February, 2021 the Herdsmen dragged ttheir Cows to a farm owned by one Mr. Ajadi Yekinni along Osun Budepo Road, as usual,but this time, the farmer was in the farm and immediately they noticed him they ran, but the farmer hit one of the cows on the leg to identify those coming to his farm and reported to the police, however, the man was compelled to pay 100k for the Cow as the Police was quoted as saying that the farm produce ate by the Cow is small in price, so reporting to the police may not bring succour to the farmers”,

“Sometimes in 31st October, 2020, 2 of our Poultry Farmers, Alh. Rasheed Abimbola and Alfa Abdul Wasiu Oriade and one of their staff were adopted by Fulani Herdsmen and kept in their custody for 3 weeks, subjected to beating, and maltreatment in the thick forest after which they were released for ransom”, he explained.

Akeusola added that they have calmed the residents and their colleagues in other to maintain peace assuring that Ogun State government would come to their aid in putting an end to the activities of herdsmen on their farms.