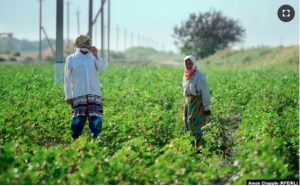 Just as many Uzbek farmers began sowing the seeds for this season’s crops, President Shavkat Mirziyoev called on them to give some of their agricultural land to young people without jobs.

“Every farmer should allocate two hectares of land [that will] be given to four young people, [each of them getting] half a hectare,” Mirziyoev said at a cabinet meeting in Tashkent on January 27. “They will grow whatever crop they like on that land.”

The president ordered that one hectare from every 10 hectares of farmland should be given to young people.

Six weeks since the announcement, many farmers told RFE/RL they were unhappy watching their income diminish. But in an authoritarian country where the president enjoys enormous power, farmers have no choice but to comply.

“Representatives from local governments and prosecutor’s offices gathered us together and said there were 300 young unemployed people in our district that should be given land,” a farmer from the eastern Namangon Province’s Uichi district told RFE/RL. “We had to agree, what else can we do? This is a government order and we have to agree or we could lose all of our land,” he said, on condition of anonymity.

RFE/RL’s Uzbek Service received similar complaints from many other farmers from across Central Asia’s most populous country.

“We still have to pay taxes for that part of the land that was taken from us,” said a farmer from the Qushrabot district of Samarkand Province. “Those who received our land [for free] don’t have to pay for anything.”

Uzbek officials have insisted they are not forcing anyone to give up their land.

An official from the Agriculture Department in Namangan Province told RFE/RL the project was being implemented carefully, taking into consideration the situation on the ground. “The land is being allocated depending on the capacity of each farming enterprise and each district,” the official said. He pointed out that many people had welcomed the project, which he said provided young people with an opportunity to earn their own money.

In the eastern Andijon Province, one farmer says he supports the idea of helping others, although he admits “it does hurts” his own income. “It’s impossible not to give a part of your land to your neighbors when you see they’re struggling without work,” said Elyorbek Hakimov, the head of the Sobitkhon-Ota farming enterprise in Andijon’s Ulughnor district.

Hakimov said his farming enterprise had allocated farmland to four young people who were unemployed. He said they’d already grown corn and potatoes and he believes that if the new farmers work hard, “they can harvest two crops in one season.”

“Our young people can’t go anywhere to find jobs now,” Hakimov said. “But [if they get land] at home they will make at least some money by growing crops.”

Jobs are hard to come by in Uzbekistan, where many households in the country of some 35 million depend on worker remittances sent from Russia, Kazakhstan, and other countries. According to government statistics, unemployment in Uzbekistan in 2020 was about 13 percent, although the real figures could be higher than the official statement.

Before the COVID-19 pandemic, experts estimated that about 6 million Uzbeks worked abroad, many of them engaged in seasonal jobs such as construction work and farming. Since last year, millions of Uzbek migrant workers have been unable to travel abroad as the pandemic led to border closures and travel restrictions.

Meanwhile, some of those who received free farmland told RFE/RL that in a few cases the authorities took the land back just days later without providing any reason.

For example, in Samarkand’s Qushrabot region, officials canceled the allocation of some 22 hectares of land a week after the documents had been signed.

RFE/RL spoke to one young person in Qushrabot who was given about 40 acres of land before it was taken back by the local government. He said several unemployed youth were given agricultural land under the president’s plan. But the decision was reversed by district officials who gave no reason.

Uzbekistan analyst Saparboy Jubaev says the government must use its own resources to create jobs for young people in rural areas. “Such projects shouldn’t be implemented at the expense of farmers,” said Jubaev, a former official in the Uzbek Finance Ministry.

“For example, in Kazakhstan, the government provides incentives for young people willing to move to remote, rural areas in the country’s north,” said Jubaev, who works at the Eurasian National University in Almaty, Kazakhstan. “The government offers them land parcels, livestock, machinery, and financial aid.”

In a separate action, Mirziyoev has also urged private entrepreneurs to give jobs to younger people. That project, too, has been unpopular with many businessmen, who complain they are on the verge of bankruptcy after many months of quarantines and restrictions due to the pandemic.

Analysts note that Mirziyoev’s predeccessor, autocratic leader Islam Karimov, tried at various times during his turbulent rule to carry out agrarian reform, the last time in 2008.