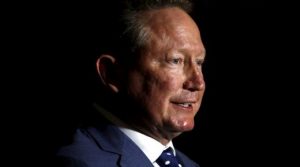 Fortescue Metals Group Ltd is looking to build a green hydrogen plant in Brazil, executives told Reuters on Monday, as the Australian miner acts on recently announced plans to go carbon neutral by 2030.

Fortescue Future Industries (FFI), a unit of the company, has signed a memorandum of understanding (MoU) with Porto do Açu, a major Brazilian seaport and industrial hub, to study the feasibility of installing a 300-megawatt green hydrogen plant onsite. The preliminary agreement, signed in late February, has not been previously disclosed.

Fortescue, the world’s no. 4 iron ore producer, announced separately on Monday plans to go carbon neutral by 2030, bringing forward its previous target by 10 years. As part of that goal, the company aims to produce green hydrogen at a commercial scale by 2023.

Green hydrogen is a zero-carbon fuel made by using renewable power to split water into oxygen and hydrogen, increasingly promoted as a way to clean up emissions-heavy industries such as mining, refining and agriculture.

Under the terms of the MoU, the hydrogen would be used to produce 250,000 tons per year of ammonia, a building block of agricultural fertilizers. The plant itself would be powered by solar and wind projects, Açu Chief Executive José Firmo and FFI Latin America head Agustín Pichot said in a joint interview.

Among the possible partners in the project, Pichot said, is Norway’s Equinor ASA, which signed a separate MoU in February to assess the construction of a solar plant at Açu.

If FFI and Açu move ahead with the project, the investment required would likely be in the hundreds of millions of dollars, Pichot and Firmo said.

Firmo said that they expect to make a final investment decision this year and they could begin construction within months of that.

Fortescue is scouting locations around the world for green hydrogen plants, said Pichot. In November, the company announced it was considering a 250-MW hydrogen plant in Tasmania.

Açu, one of the busiest ports in Brazil, is owned by Prumo Logistica SA, which is controlled by U.S. private equity firm EIG Global Energy Partners. (Reporting by Gram Slattery Editing by Brad Haynes and Marguerita Choy)