Japan to hike tariffs on U.S. beef as FY imports near limit: Kyodo 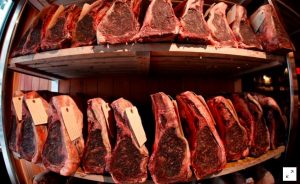 Japan to hike tariffs on U.S. beef as FY imports near limit: Kyodo

Japan is set to temporarily impose higher tariffs on U.S. beef, with imports for the fiscal year ending this month expected to exceed the maximum amount set under the Japan-U.S. trade agreement that took effect last year, Kyodo News reported.

It would be the first time the safeguard measure has been imposed on U.S. beef since August 2017, Kyodo said.

Japan had imported an accumulated 233,112 tonnes of U.S. beef by the end of February, just shy of the maximum 242,000 tonnes agreed for this fiscal year, according to Japanese customs data.

With the safeguard measure, the tariff would rise to 38.5% from 25.8% for 30 days, Kyodo said, adding that lower imports from Australia due to drought had boosted demand for U.S. beef.

Officials at Japan’s agriculture and finance ministries declined to comment on the report, but noted that the import figure for early March will be released on Wednesday.

If the accumulated import volume exceeds the maximum level, then the safeguard measure would kick in the following day, they said.