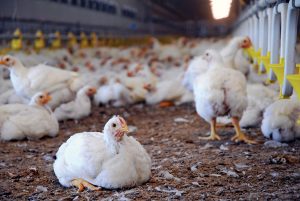 From hatching operations to processing plants, the mid-February winter storms disrupted the broiler chicken industry, said the USDA on Monday, with a lasting effect on broiler production. The monthly Livestock, Dairy and Poultry Outlook estimated that broiler meat production would be 100 million pounds lower in the first half of this year.

Preliminary data show a 44% drop in broiler slaughter volume in the week ending on Feb. 20, during the worst of the weather. “The preliminary slaughter data point to notably lower slaughter volumes in February year over year. Further, eggs set and chick placement data indicate fewer birds available for slaughter, likely into April.” As a result, USDA lowered its estimate of first-half production to 20.080 billion pounds, a reduction of nearly one-half percentage point.

Turkey production also was affected by “the extreme winter weather in the third week of February,”  said the USDA, in lowering its forecast of production by 1% for the year.


Post Views:
36
Previous articleSee how the Federal Government builds capacity of extension workers to boost their service delivery
Next articleTargeting youths for farming