Toxic impact of pesticides on bees has doubled 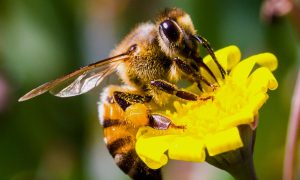 Toxic impact of pesticides on bees has doubled

The toxic impact of pesticides on bees and other pollinators has doubled in a decade, new research shows, despite a fall in the amount of pesticide used.

Modern pesticides have much lower toxicity to people, wild mammals and birds and are applied in lower amounts, but they are even more toxic to invertebrates. The study shows the higher toxicity outweighs the lower volumes, leading to a more deadly overall impact on pollinators and waterborne insects such as dragonflies and mayflies.

The research is based on the use and toxicity of 380 pesticides applied in the US from 1992 to 2016. The scientists said the same trend of lower volumes but greater toxic impact is likely for many regions in the world, but open-access data on pesticide use is not available in the EU, Latin America, China or Russia.

Pesticides are one factor cited by scientists for the plunging populations of some insects. Insects play vital roles in the ecosystems that sustain humanity, in particular by pollinating three-quarters of crops.

“Compounds that are particularly toxic to vertebrates have been replaced by compounds with less vertebrate toxicity and that is indeed a success,” said Prof Ralf Schulz, of the University Koblenz and Landau in Germany, who led the research. “But at the same time, pesticides became more specific, and therefore, unfortunately, also more toxic to ‘non-target organisms’, like pollinators and aquatic invertebrates.”

Schulz said: “GM crops were introduced using the argument that they would reduce the dependency of agriculture on chemical pesticides. This is obviously not true if you look at toxicity levels.”

The study, published in the journal Science, used US government data on pesticide use and the level of the toxicity of each chemical to give a measure of the “total applied toxicity”. This enabled changes over time to be assessed. Looking solely at the amount of pesticide applied gives a false picture, the scientists said, because some are several orders of magnitude more toxic than others.

They found that the replacement of organophosphorus and carbamate insecticides reduced the total toxicity to mammals and birds by a factor of nine. “In sharp contrast, the total applied toxicity to invertebrates has markedly increased since approximately 2005,” they said, despite the amount of insecticide applied decreasing by 40%.

This was because pyrethroid and neonicotinoid replacements are more toxic to pollinators and aquatic invertebrates. The harm to bees has led the EU to ban some neonicotinoids from outdoor use.

The scientists said the impact on insects could have knock-on effects on other animals such as birds that rely on them for food, as indicated in a study in the Netherlands in 2014. They also said the lack of public pesticide data in many places “potentially masks a crucial driver of the global biodiversity decline”.

“The more we know about the problems the better, so therefore I would call our study good news,” said Schulz. “It is then obviously a political and societal debate about what kind of effects we want pesticides to have or not have.”

Chris Novak, the president of CropLife America, which represents pesticide companies, said: “Our members continue to innovate solutions that have less impact on human health and the environment, but our innovations must meet the needs of a dynamic farming system. We are committed to continuing to work with the [US] Environmental Protection Agency to apply the best science, which balances the risks and benefits of pesticide use.”

Josie Cohen,of Pesticide Action Network UK, said: “Some neonicotinoid insecticides are 10,000 times more toxic than DDT, the most notorious insecticide in history. The UK government urgently needs to deliver on its promise to improve the woefully inadequate current monitoring system for pesticides by moving beyond just measuring the weight of chemicals.”