Stakeholders from the civil society and the media have said bandit attacks heighten risks for acute food crisis in Nigeria.

They insisted that the adoption of new approaches by the government will address the specific political, economic, and social challenges that encourage banditry and terrorism in the country.

According to the communique which was co-signed by Gbenga Onayiga and Adamu Ladan, the Acting Chairman and the Executive Director of the Vision Center for Communication and Development Advocacy (VICCDA), the conveners of the meeting, it read in part: “It is a matter of concern to participants that banditry is fast becoming part of the daily life of the populations, giving the country the notoriety of being one of the members of the club of 10 top kidnapping countries in the world and a leading one in Africa.

“In addition to displacement, insecurity has hampered agricultural activities and heightened the risk of acute food uncertainty in the country.

“It is worth noting that the effects of this on Nigeria’s sustainable development in the light of public safety, capital and investment flights, as well as its negative consequences on trade, tourism and Foreign Direct Investment (FDI), is enormous.

“While appreciating the fact that national politics can form an important framework in the fight against insecurity, stakeholders call on Nigerians to unite to defeat terror rather than doing anything that could promote it.

“The Forum believes that the war against terror is everybody’s war and thus there should be adequate synergy between the Military, the Media and other Stakeholders. In this connection, however, Forum advises government not to allow the public to lose confidence in its ability to deal with the situation.”

READ ALSO: See the New Tree-fungus Supplement that Could Reduce Fertilizer use in Tomato Crops

“Participants resolved that the government should adopt new approaches that will address the specific political, economic, and social challenges that encourage banditry or terrorism in general, and the potential solutions that reduce them as the most reliable way forward.”

Furthermore, the communique added that: “It is noted, however, with regret that despite several official reassurances of responsiveness in rising to the occasion, the state of insecurity is being heightened by the day, thus bringing infamy to the country.

“The Forum acknowledges the fact that the fight against terrorism and banditry are most daunting and challenging tasks but expresses the belief that with political will and commitment by our leaders in creating an enabling environment for independent and free press to thrive, the media could influence the right attitude by most Nigerians and this will ensure that conflicts are minimized.

“The situation calls for caution and the need to support the government to do more in finding lasting solutions to the intractable problems and to warn against making any capital out of it.

“It is a moment for united action to defeat terror and not to do anything that could embolden the perpetrators.”

This News Post is Sponsored by BIACOM AGRO ALLIED LTD 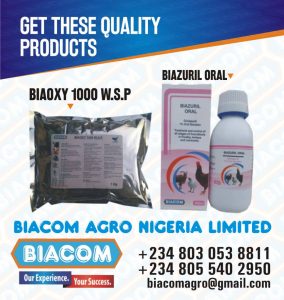