What Fulani community in Kaduna are saying now 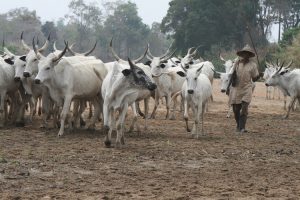 What Fulani community in Kaduna are saying now

The Fulani community in Kaduna State under the auspices of Miyetti Allah Cattle Breeders Association of Nigeria (MACBAN) has claimed that they lost seven kinsmen as well as 850 cattle in five days of a communal clash last month in Zangon-Kataf council area of the state.

They made the claim in Kaduna on Thursday while addressing a press conference at the NUJ Secretariat, saying that the killings came after several peace efforts by concerned stakeholders of Fulani, Hausa and Atyap groups in Kataf chiefdom and environs.

MACBAN’s Director of Media and Publicity, Ibrahim Bayero said, “There were several attacks on Fulani people and their livestock in Zangon-Kataf LGA’s and surrounding Local Governments in recent weeks.The association, therefore, views the renewed violence on its members as provocative, mindless, deliberate and criminal acts capable of endangering more chaos to the entire Southern Kaduna.

“We commiserate with the families of the deceased and those who lost valuable wealth during the violence.

“The government should pay adequate compensation for the lives of our members who were killed during the attacks as well as for their wealth that was heartlessly destroyed,” MACBAN demanded.