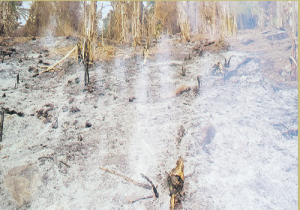 All his life, 85-year-old Nicholas Komolafe, an indigene of Oya quarters, Omuo-Ekiti, Ekiti East Local Government Area of Ekiti State, has been a farmer. Sitting under the shade that this tree provides outside his home, he engages Lawrence Ekunode, his peer, in a conversation. A closer look at him revealed that he is strikingly aged.  With a shaky yet steady voice, he recounted, “I inherited my farmland from my forefathers and that is my only farmland. The farm is my only source of income to cater for my wife and children. My survival now depends on God. I will appreciate any help that the government renders to us.” Komolafe’s farmland was among the about 1000 hectares of farmland gutted by fire on the 19th of February, 2021 at the Oya Quarters of Omuo-Ekiti, Ekiti State.

Like Pa Komolafe, about 2400 farmers have not recovered from the shock of the wildfire that destroyed their farmlands in the State. These farmers bemoan the wrath of fire as it spreads its tentacles. According to the State Environmental Management Agency (SEMA), about 1000 hectares of farmland has been burnt to the ground in Isinbode, Idogbe, Oya, Ijero-omu, Iludofin, and Iworo quarters in Omuo-Ekiti. Cash crops destroyed include cocoa, banana, oil palm and coffee. When some farmers at Oya Quarters were asked how long it takes for Cocoa to grow, they all laughed at the reality of the question. “It will take about 10years,” they chorused.

This incident is only a fraction in the larger equation of farm fires in the state.

In 2021, there has been a quantum leap in the number of farm fires in the State. This could be as a result of increased activities of uncontrolled bush burning or indiscriminate hunting activities. Mr Olusegun Afolayan, head of operations at the  National Environmental Management Agency (NEMA),  blames the farmers for most of the farmland fire incidents. “When you tell them to take certain precautions, they won’t do it. The government is making some efforts to make sure that fire disasters don’t happen. We envisaged it and it is happening now,” he blurted.

Abigail Akomolafe, a 76-year old mother of ten children, shared her ordeal with weariness. She is also an indigene of Oya Quarters, Omuo-Ekiti. Vividly recounting the ordeal at her destroyed farmland, she failed to smile at the jokes her relatives threw at her to provide succor to her pain. Instead, she passionately narrated her woes. She said, “When I got to my farmland, I fell to the ground weeping profusely. For three days, I had a fever. In fact, as I speak to you, I am downcast.” She is a typical example of a hard working African woman. She spoke of how she goes to her farm before the dawn of the day only to return at dusk. “I used the proceeds from the farm to educate my children. I don’t have any other occupation apart from farming. Temporarily, I can’t work”, she complained. When asked what the possible cause of the fire was, she said, “Only God knows what caused the fire. It could be the activities of cigarette smokers, it could be hunters who put bushes to fire in order to hunt.”

“I used to eat three-square meals before the incident happened and I used to give my little children 200 naira each as pocket money to school but now I can’t do so. I told my children in the university that I would send money to them when I sell the batch of plantain that got burnt in the farm fire. I can’t send the money to them again and I have a child who is in the final year”, Modupe Omodara narrated. The middle aged business woman is a wholesale distributor of bananas to Abuja. According to her, she used to earn at least 25 thousand naira on each trip that a truck makes to Abuja. Now, she has no hope on her business.

Olu Omotosho, a Professor and Head of Department, Geography and Planning Science, Ekiti State University, Ekiti State, noted that the prevalence of this type of fire disaster is common during the dry season which occurs from the month of December to March. He stated the possible causes of wildfire in the State.

“Majority of the people are farmers and this is the time they prepare for the next farming season. It is possible that the farmers burned certain areas which might escalate and it might not be easily put under control. This is the time hunting activities are common. In an attempt to get bush meat or bush animals, some of the land might be set on fire and it might not be controlled,” he said. His opinion corroborates that of Mrs. Kemisola Laka, Director, Relief and Disaster, SEMA.  She said, “The major cause of farm fire is bush burning. Other causes are smoking and hunting and they are subsidiaries.”

Olalekan Olowoyo, an environmental economist and the executive director, Green Global Environmental Network, explained the myth surrounding soil fertility amongst local farmers. He explained, “The reason why people set bushes on fire is a result of the traditional way of farming. The farmers believe that there will be more productivity as a result of the potassium from the ashes and that it enhances the productivity of that land. But unknowingly, when you set a place in your farm on fire and you burn it, though there will be production of potassium and some other elements that are useful but invariably you have destroyed the ecosystem.”

READ ALSO: What Fulani community in Kaduna are saying now

He further explained  alternative means which farmers can deploy on their farmland. “The farmers can slash and then allow it to decay. When you allow it to decay, the decaying of that debris will have added to the organic content of that soil and then, there will be a resurfacing of other microorganisms that can enhance productivity. Another option is using machineries, tractors or any other machines you want to use just to incorporate the debris into the soil. There are a lot of other means that they can use instead of burning the bush,” he opined. With a note of finality, he noted, “We are discouraging the act, it is not good to set bushes on fire.”

A call to action

A victim of the Oke Ayo, Omuo-Ekiti farm fire disaster, Mr Peter Ayodele, appealed to the government to sensitise the locals to mitigate future occurrences of farm fire. He said, “The government is supposed to appeal to our people that during the dry season, farmers should not go to the farm with fire lighters like matches and other fire instigators. The hunters should be very careful.”

Prof. Olu Omotosho discouraged the practice of bush burning practiced by farmers and hunters. He urged environmentalists to take up the responsibility of sensitising the farmers. He said, “We can discourage farmers from bush burning by advising that after a portion of land is cleared, it should be allowed to decay. It will naturally decay if they could exercise a little patience instead of setting that portion of land on fire and wait till it decays. It will even serve as manure to the land and fertilize the soil. Hunting activities, especially hunting for bush meat, should be discouraged.”

The bigger picture of climate change

A random inquiry into the activities of farmers revealed that there is a high level of bush burning by farmers. In fact, this reporter was greeted by sites of bushes that are either burning or have been burnt.

Prof. Olu Omotosho revealed that these activities have an underlying effect on the climate. “The smoke released to the atmosphere automatically will affect the ozone layer within the stratosphere. The ozone layer is what is absorbing the ultraviolet rays. The ultraviolet rays are just like cups but as a result of human activities, especially smoke being released to the atmosphere, leaking occurs and that is why the environment is becoming hotter”, he explained.

“What contributes to the issue of climate change is as a result of our emission. Bush burning can also cause climate change as a result of carbon monoxide and other ozone gases that are released. During bush burning, there are a lot of gases that we don’t know that we burn. We are not controlling these gases. We are saying we can holistically control these emissions. If you set a bush on fire, you are causing a huge impact on climate change,” Olalekan Olowoyo also explained. He explained further that the changing climate condition is as a result of climate change. Similarly, Mr Olusegun Afolayan, NEMA Head of Operations, Ekiti State commenting on the adverse effects of bush burning, said, “An adverse effect of climate change is abnormal rainfall. By March, the dry season will fade away and by April, it will be signaling the rainy season. Windstorms precede rain and this causes a lot of damage.”

There are 17 Sustainable Development Goals designed to improve the living conditions of humans and promote the peaceful co-existence between the planet and man. Indiscriminate bush burning violates the SDG Goal 13.1, which aims to “strengthen resilience and adaptive capacity to climate-related hazards and natural disasters in all countries.”

Previous articleSee what a research scientist said about the level of researches in aquaculture.
Next articleADVANCE THOUGHTS ON POULTRY NUTRITION