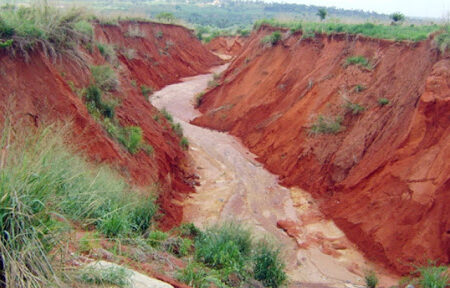 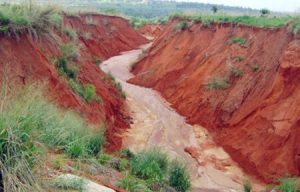 On a sunny Thursday afternoon in October in Ifite Nanka, a town in Orumba North Local Government Area of Anambra State in South-east Nigeria, Felicia Okpara sat on a chair, taking a nap in a stall in front of her family compound with her two hands on her head.

This reporter’s greeting woke Mrs Okpara, who dropped her hands, replied to the greetings, stood up and yawned.

The massive erosion site behind her house was what drew the reporter’s attention to Mrs Okpara, who is a smallholder farmer.

“Hunger is dealing with me,” she lamented when asked how the erosion site had affected her farming business. “The erosion is so disturbing that I can’t farm. It has affected my farmlands where I plant cassava and yam.”

Gully erosion in Ifite Nanka, according to researchers, started around 1850. A 2019 study by the American Journal of Geographic Information System revealed the depth of the site to be 66 metres deep, 2,900 metres long, and 349 metres wide, occupying lands meant for farming and threatening food production.

As a result of the erosion, farmers who live around the area could not farm. Mrs Okpara’s farmlands were not affected initially in the last decade but are now being gradually consumed by the erosion.

She was married into the Okpara family in the 1970s and met the erosion site, which had not started impacting the family’s farmlands then. In early 2000, the erosion site started to expand gradually to her farmlands. She thought the erosion would not affect the crops but her hope was dashed.

“We use fertilizer on the farms but whenever it rains, the rain will wash away the fertilizer, leaving me with nothing,” she lamented.