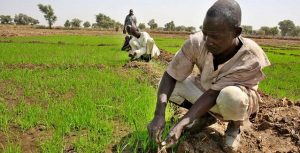 Bonafide members of All Farmers Association of Nigeria (AFAN) have distanced themselves from the ongoing General Assembly of Farmers (GAF) presently being held at the Government House in kano state just as they described the meeting reckless and rascal to court order especially in a democratic dispensation when the rule of law supposes to be upheld.

Many that spoke with Food Farm News out rightly dissociated themselves from the conference saying the meeting is a show of disregard for the rule of law when actually the faction was the one that instituted court case before Justice Taiwo Taiwo of the Federal High Court in Abuja against the substantive leadership of Architect Ibrahim Kabiru.

One of the farmers who took to the social media platform of whatsapp described those people behind the GAF meeting in Kano as not law abiding people who are actually aiding division within the All Farmers Association of Nigeria (AFAN) being led by the leadership of Kabiru, adding that the attention of the reconciliation committee should be drawn to the action.

Another farmer who spoke with Food Farm News under anonymity expressed disappointment on the role the minister of Agriculture and the Kano state government have been playing in the whole saga, wondering how a government property could be allowed for farmers’ conference that is under court ligation, just as he pointed that sometimes last year some equipment belonging to the Federal Ministry of Agriculture and Rural Development (FMARD) were also released to this group without court consciousness.

A call to a close source among the Faruk group who was actually at the meeting in kano said there was no breach of law anywhere against the GAF, but added that the farmers’ assembly is long overdue for an association like AFAN.

The AFAN lawyer, Barister Ademola Adeya who had once cautioned the Association against holding any GAF told Food Farm News that Faruk faction has no right also to hold any meeting of such, and pointed that the action would be reported as soon as the court resumes from its national strike.