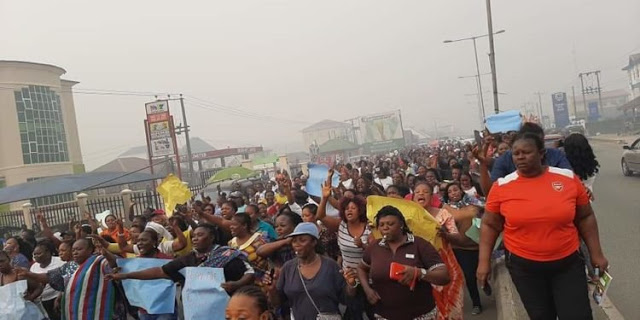 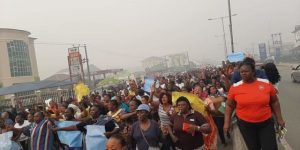 See how women, youths protest against lack of amenities in Bayelsa council

Irate women and Youths of Egbomotoru Community in Southern Ijaw Local Government Area Of Bayelsa State, yesterday, shut down business activities in some parts of the local council headquarters in protest against the alleged neglect by the Nigerian Agip Oil Company (NAOC) over unfulfilled Global Memorandum of Understanding (GMoU) on social amenities in the area.

The angry youths and women, armed with placards with inscription such as, “we no go gree ooo, Agip give us our right”, alleged that the acts of neglect by the Agip Oil company are vexatious and may provoke actions that may disrupt the exploration activities of the oil company.

According to the people of Egbomotoru Community, despite the presence of oil facilities in the community, there is no tangible development in the area.

“The people’s main source of livelihood, which is mainly farming and fishing, have been affected by severe oil spillage.”

According to them, in 1971, Agip had a memorandum of understanding (MoU) with the community but till date, no development has come to the community and they are struggling to feed because their only source of livelihood has been destroyed by activities of the oil exploration company.

On calls for the sack of Dalong Security, the security company handling the Oil Pipeline Surveillance contract for Agip Oil Company, the protesters accused the company and its owner, Chief David Lyon, of allegedly sidelining them from available jobs and demanded that the company should be sacked and asked to move out of the area.

One protester, identified as Agoromiekumo, pleaded with Agip to allow them take charge of the the pipeline surveillance job. According to him, Egbomotoru has lost so many youths as a result of this issue but Chief David Lyon, who is in charge of the surveillance, has not, in any way, visited the community or identified with them.

Egbomotoru Community also called on the Nigerian Agip Oil Company to withdraw the pipeline surveillance of Egbomotoru from Chief David Lyon and hand it over to the community.

The angry protesters have asked Chief David Lyon to stay away from Egbomotoru, noting that one cannot allow a stranger come to his backyard and harvest the crops for which he has laboured or take possession of the house which he has built, as provided in the holy scripture.

They also called on the Bayelsa State government to come to their aid as they are afraid of returning to their normal daily activities due to the previous experiences they have suffered from the hands of Dalong Security Company, owned by David Lyon.