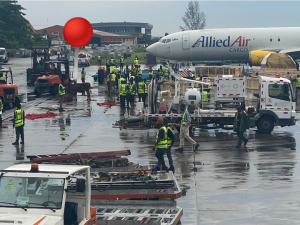 There was a drama at the cargo area at the international wing of the Murtala Muhammed International Airport, Lagos, when one of the 250 cows flown into the country through the airport broke loose from its crate, leaving airport workers at the tarmac running for cover.

The bubble burst when one of the crates carrying the cows got damaged and the ground staff could not secure the cows after offloading which forced one of them to break loose and started chasing airport workers present on the tarmac.

READ ALSO: How to stop workers from stealing your farm products

The drama did not last for too long as those on ground were able to bring the cow under control.

The cows have successfully been loaded into waiting vehicles for their transportation to Ekiti State.

The cows were said to have been imported into the country by Ekiti State government in partnership with a private organisation for their Dairy Farm in Ikun. 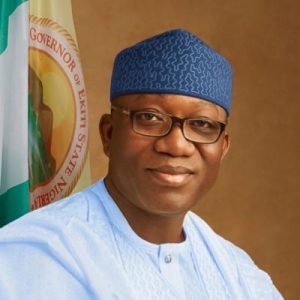 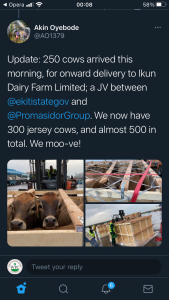 You can join WORLD FARMERS CENTRE’S vibrant WhatsApp group for more updates and interactions with other farmers HERE. Please don’t click if you are already a member


Post Views:
1,347
Previous articleSee the PRESS STATEMENT about the Livestock industry in Nigeria from the office of the Senate president
Next articleHow Lagos Intend To Generate $10Bn In Agriculture Investment By 2025