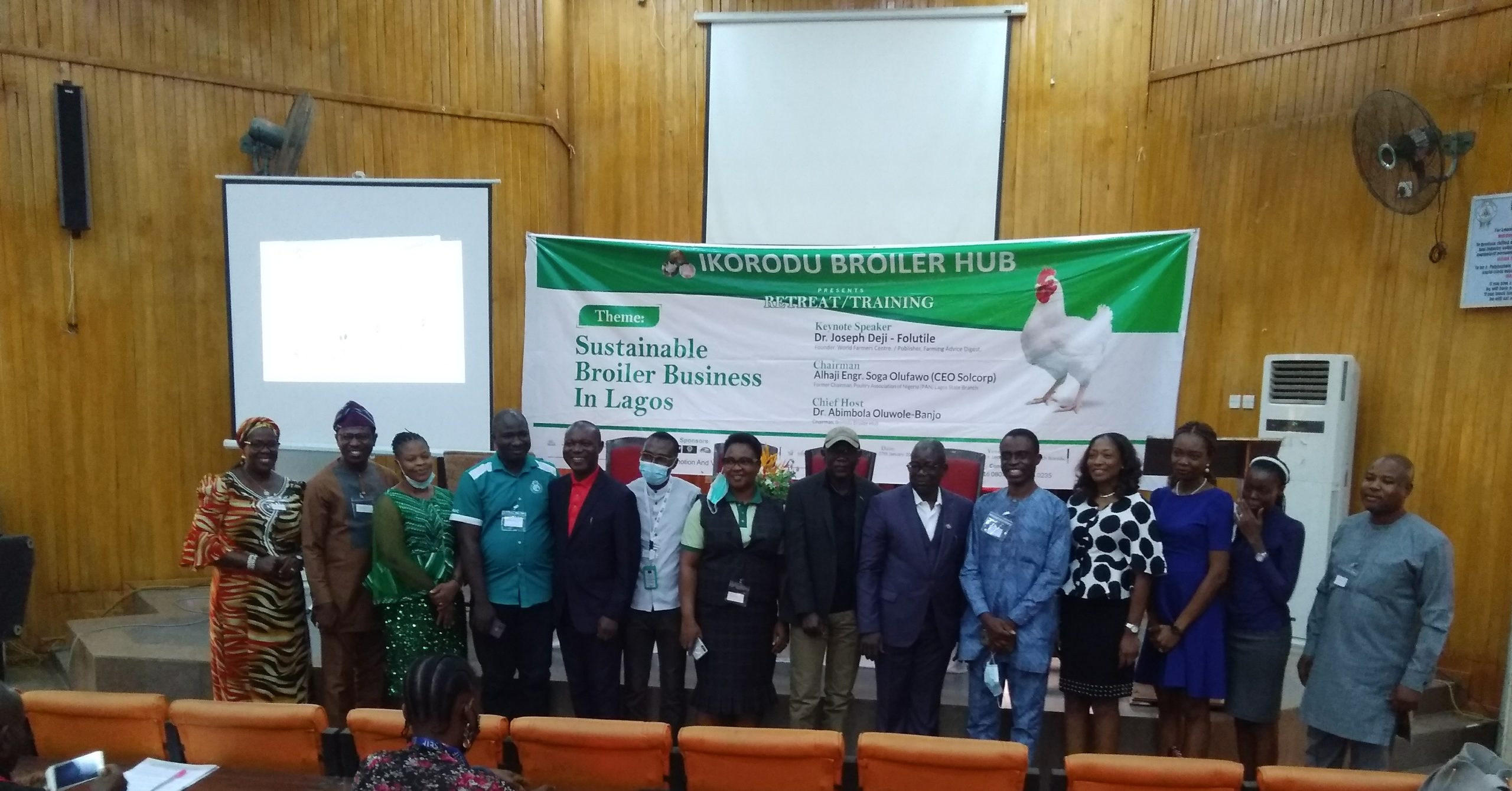 In a bid to collectively address some of the issues limiting broiler production in Lagos, poultry farmers in the state have launched the Ikorodu Broiler Hub.

The hub which was formally launched during a retreat and training programme for poultry farmers in Lagos will help bridge the demand-supply gap in poultry production in the state by making the business profitable to attract more investments.

According to the technical committee of the hub, the challenges limiting poultry production in the country are numerous and are better addressed as a group rather than the individual efforts of many stakeholders which as yielded little benefits in the past.

READ ALSO: Diseases that can be Contacted from Birds(protect yourself)

“Over the years there have been a lot of bottlenecks disturbing profitability of broiler production in the state ranging from high input costs, production technologies, and marketing,” said Olajide Basorun, a member of the technical committee.

“This has made broiler business unattractive as lots of farmers continue to lose their investments. It also gave room for the vacuum of the demand-supply gap, thus fuelling importation,” Basorun who is also the chairman of Rhyss Farm Ltd said.

He stated that to address the issues and make broiler production profitable, farmers in Ikorodu decided to come together and launch the Ikorodu Broiler Hub.

“We are launching the hub to develop a template for production by sitting with input providers, and financial institutions to resolve some bottlenecks limiting production.”

“We have the farmers and people who are willing to invest when they realise it is a profitable business. With the right technology, environment farmers will produce optimally.”

He stated that the hub was launched in Ikorodu owing to its relevance in broiler production in the state, saying that with time other hubs would be launched across the state as well.

He noted that the hub will key into the THEMES agenda of the agenda of Governor Babajide Sanwo-Olu administration.

Similarly, Soga Olufawo, chairman of the occasion, and an engineer said efforts should be made to ensure food security in the state, adding that the hub will be collaborating with the current administration in the state to enhance broiler production.

He advised them to be marketing-oriented and strive to satisfy customers’ needs in every way possible by studying their behaviour. Marketing should be planned and linked with market research.

He highlighted seven marketing concepts that will enable the poultry farmers to drive a sustainable business and become profitable when strictly adhered to.

He defined marketing as the anticipation of customers’ needs and profitable satisfaction of those needs.

Folutile urged the farmers to focus more on marketing their products than they do on production, that they should work with the 60m, 30m and 10m principles in management of their farm business.

Also present at the event was the Feed Industry Practitioner’s Association of Nigeria (FIPAN), Mr Raymond Isidianso of Mid-Century Agro-Allied Ltd, a representative from Bank of Agriculture, Mrs Nwachukwu Chioma.