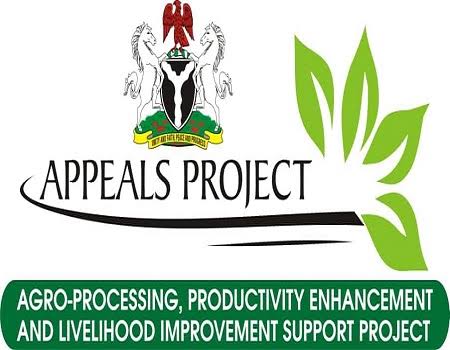 SINCE it started in the year 2017, the Agro-Processing, Productivity Enhancement and Livelihood Support (APPEALS) project in Lagos State has boosted the capacity of no fewer than 17,400 farmers, this according to the coordinator of the project, Oluranti Sagoe-Oviebo.

Sagoe-Oviebo, made this known while giving an account of the project in the state in the last five years at the Lagos APPEALS project  office, Oko-Oba, Agege, Lagos. She noted that a total of 3950 regular farmers had benefited from the project directly, adding that 1786 women and youths had also benefited while 7533 farmers had been trained.

The $200 million World Bank Supported project which is taking place in six states of the federation i.e Lagos, Cross-River, Enugu, Kaduna, Kano and Kogi started on March 23, 2017 and expected to end March 31, 2023.

She also informed that the project had also recorded other successes including: desilting of canals especially around Ikorodu and Epe axis, knowledge management and evaluation for farmers, support to marketers and processors with solar powered kiosks, among others.

“The project is aimed at supporting farmers’ productivity and their linkage to markets; facilitating the consolidation of agricultural products and cottage processing; facilitating farmers and small and medium businesses’ clustering and connection to an infrastructure network and business services as well as providing Technical Assistance (TA) and institutional support to beneficiaries, federal and state governments in value chain development,” she said.

A beneficiary of the World Bank-funded project, Seyi Ladega, while sharing her experience so far said: “Before the Appeals Project came onboard, we had several difficulties like bad roads, unsustainable production. When they came onboard, they not only supported us with grants, they also took us through training from management to production and that has helped us to keep records. The Appeals Project even did record books for us to help us monitor our performance.”

Speaking further, Ladega noted that:In terms of Broiler production, the Appeals experience was very successful. They linked us with verified off takers. We have taken a cue from that and in the next one year, Enikorodo and Ikorodu environs will be the hub of broiler production in West Africa. We want to ensure that in Lagos we do not import frozen chicken anymore, we will produce traditional standards,” she added.

Another beneficiary, CEO of Easy Shop, Easy Cook, Saudat Salami, while sharing her experience stated that through the intervention of the Appeals Project, the company had been able to acquire a 15 ton Cold room which has accelerated their production and distribution within Nigeria.

Salami further said:“They wanted to be sure that we had a proper business structure in place and we were serious about what we were doing. Now, we are able to supply companies who order in tons which we were not able to deliver before they came onboard.”

Coordinator of the project, Oluranti Sagoe-Oviebo, also said the project has contributed N333.9m to the state’s GDP through the farmers supported by the project in 2020.

Sagoe-Oviebo also disclosed that about N199m worth of products in aquaculture, poultry, and rice, have been sold by women, and youth since they received grant support from the project, noting that 44.14 per cent of the 3, 950 beneficiaries supported by the matching grants were females.

“The project has continued to promote productivity enhancement technologies and value addition through the demonstration of improved technologies. These have directly impacted the project … The productivity of rice paddy in the state has increased from 2.0 MT to 3.5 MT/Ha. Tilapia has increased from 100 Kg/ m3 to 140 Kg/m3, and broiler from 1.8 Kg/ bird per cycle (live weight) to 2.35 Kg/ bird. The processed output and sales of products for the value chains follow the same trend.

Sagoe-Oviebo, therefore appealed to farmers to own the project. She said if the farmers own the project, Governor Babajide Sanwo-Olu would continue to support it even after its experation