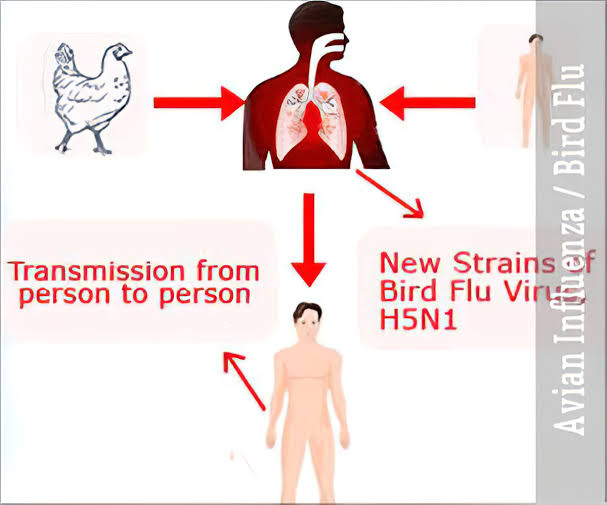 Bird flu also known as avian influenza is a viral disease of birds. It is caused by influenza type A virus. There are many subtypes of avian influenza viruses, but only some strains of five subtypes have been known to infect humans: H5N1, H7N3, H7N7, H7N9, and H9N2. All the subtypes are distinguished on the basis of variations in two proteins found on the surface of the viral particle— hemagglutinin (H) and neuraminidase (N). Influenza viruses mutate easily and often.

These mutations can arise spontaneously in a single virus or can occur when two different influenza strains get close enough together to exchange genetic material. There are two major types of mutations in influenza viruses: antigenic shifts, where large RNA segments are interchanged between different influenza virus type, and antigenic drifts, where small RNA sequences are changed. The antigenic shifts are usually responsible for developing new strains. For example, the 2009 swine flu pandemic was caused by a virus that included genetic material from pig influenza, avian influenza, and human influenza strains. New mutations can allow the virus to evade the body’s immune system and makes older vaccines ineffective.

Most human cases of the avian flu are a result of either handling dead infected birds or from contact with infected fluids. It can also be spread through contaminated surfaces and droppings. While most wild birds have only a mild form of the H5N1 strain, once domesticated birds such as chickens or turkeys are infected, H5N1 can potentially become much more deadly because the birds are often in close contact. H5N1 is a large threat in Asia with infected poultry due to low hygiene conditions and close quarters.

Avian influenza is most often spread by contact between infected and healthy birds, though can also be spread indirectly through contaminated equipment. The virus is found in secretions from the nostrils, mouth, and eyes of infected birds as well as their droppings.

HPAI infection is spread to people often through direct contact with infected poultry, such as during slaughter or plucking. Though the virus can spread through airborne secretions, the disease itself is not an airborne disease. Highly pathogenic strains spread quickly among flocks and can destroy a flock within 28 hours; the less pathogenic strains may affect egg production but are much less deadly.

Although it is easy for humans to contract the infection from birds, human-to-human transmission is more difficult without prolonged contact. However, public health officials are concerned that strains of avian flu may mutate to become easily transmissible between humans.The main symptom of bird flu can appear very quickly (3-5 days) in human and include:

Other early symptoms include:

Bleeding from gums and nose

It is universally known that prevention is better than cure. The poultry farmers should maintain proper biosecurity measures. People should disinfect shoes or change clothes when entering the farm. The farm should be kept free of droppings that could spread the virus. Dead poultry should be removed and incinerated or buried deep in the ground to avoid transmission of virus to healthy birds. Farm clothes, tools and transport equipment should be regularly disinfected to avoid the transmission of virus to other poultry farms.

READ ALSO: How to Control Ammonia Levels in Poultry Houses

The water and air entering or leaving the farm should be disinfected. Wild birds should have no access to the poultry birds. Foot dips should be used at the entry of farm. Any type of sickness in birds should be immediately reported. On the other hand, the poultry retailers should maintain proper records of retails to ensure traceability.

The dead birds should not be sold and should be disposed off properly. Futher the poultry offal should not be thrown in open. The meat should be properly cooked before eating. The hands should be washed thoroughly before and after handling of eggs.