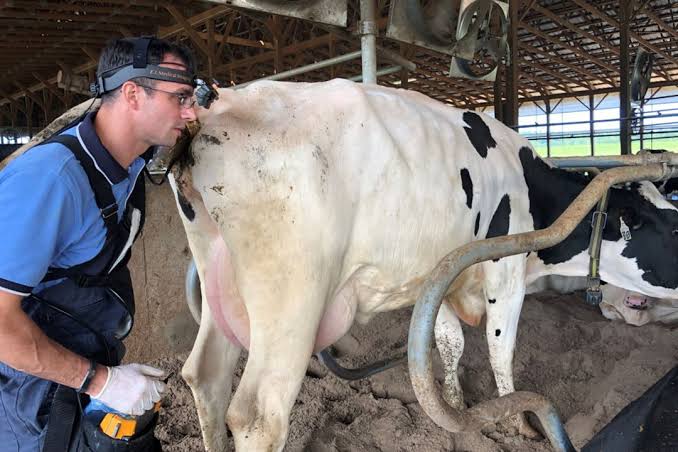 Acetylsalicylic acid, commonly known as aspirin, is well-known in human medicine. It’s widely used as an orally-administered non-steroidal agent that causes decreased synthesis of prostaglandin, platelet aggregation and inflammation. As most of us know, it relieves pain, reduces fever and also has anticoagulant properties. However, its use in veterinary medicine is not as well known.

Dr Barragan is an assistant clinical professor in the Field Investigation & Research Department of Veterinary and Biomedical Sciences at Penn State University.

Dr Adrian Barragan and his colleagues are among those to publish results of studies involving treating dairy cows with aspirin after calving. Barragan is an assistant clinical professor in the Field Investigation & Research Department of Veterinary and Biomedical Sciences at Penn State University.

Specifically, he and his colleagues looked at giving aspirin to prevent the udder diseases that cows are prone to experience during the dry-off period in the lactation cycle. Anti-inflammatory drugs such as aspirin have already been shown to have other positive effects in terms of milk production, uterine health and fertility.

However, it is not a common practice across the dairy industry worldwide to give aspirin after calving, says Barragan, “especially when cows delivered their calves without any problems, what is known as normal or eutocic calving.”

He points to a paper from 2007, a survey of Canadian veterinarians, in which only 38% of the participants provided analgesia in dystocia (not normal) calving.

There is another paper from 2021, he adds, where Californian dairy farmers were surveyed. There was a very low anti-inflammatory treatment rate in cows after dystocia.

“Only 9% of the farms would provide anti-inflammatory treatment,” says Barragan. “With that being said, the main objective of these treatments is to alleviate immediate pain and discomfort associated with tissue trauma from the birthing process. This, as a result, would improve cow performance.”

However, there is interest in the properties of aspirin. Barragan says he’s been approached “by a number of veterinarians and producers that were interested in implementing the aspirin treatment approaches we utilised in these studies.”

The dry-off period is a much-needed part of the lactation cycle, says Barragan, where the udder tissue is allowed to ‘remodel’ and the mammary gland can also prepare for the upcoming lactation.

Indeed, Barragan notes that if dairy cows have a short dry period (<35 days) or no dry period at all, it results in lower milk production, 4.5% or 19%, respectively, compared to cows that have a standard dry period length (40-60 days). Similarly, having an extended dry period (>80 days) also has negative effects on milk production and components, and can also cause over-conditioning.

But during dry-off, care must be taken as the risk for subclinical and clinical mastitis increases. Increases in the internal pressure in the udder cistern cause milk leakage, which opens up a direct path for pathogens to enter the udder. As dairy producers know, about 40% of postpartum cows are prone to mastitis, and cows that are calving for the first time or have a difficult calving are at the highest risk.

Performing an ultra-sound here. Anti-inflammatory drugs such as aspirin have already been shown to have other positive effects in terms of milk production, uterine health and fertility. Photo: Dr Adrian Barragan

Gradual milk cessation and diet changes have been examined as preventative measures for mastitis.

However, Barragan says the effects of these practices on cow metabolism are not yet fully understood, and therefore caution should be exercised with using them.

“There are 2 main areas in the cow metabolism that could be affected by these practices,” he explains. “The systemic inflammatory response associated with this practice that, although it may be lower, it might be prolonged. The other could be energy metabolism. Ideally, at this time, we want cows to have a neutral energy balance. By restricting feeding or changing diet components, we may be creating a negative energy balance which could trigger a cascade of undesirable events. Effects on milk production in the subsequent lactation are possible, as some studies have reflected that dry-off practices can affect this.”

To reduce the risk of mastitis during dry-off, cows could also be given anti-inflammatories. But not much research has been done to assess this.

In a 2016 study, for 3 days after calving, cows were given aspirin in daily drenches or meloxicam by oral capsules. Treated cows had significantly lower somatic cell scores several months after calving compared to placebo cows.

In the experiments of Barragan and his colleagues, cows were treated with aspirin boluses every 12 hours for 2 days after calving. Treated cows had around 43,000 cells/mL less somatic cell counts during the first 5 tests when compared to placebo cows.

When asked how these research results could or should be used at the farm level, Barragan says “this is an excellent question”.

He explains that “these series of trials are meant to be a proof of concept to prove the importance of modulating inflammation around these periods. These types of treatments should be used as a supporting strategy when main farm practices targeted to maximise cow comfort and preventing diseases failed.”

Dr Barragan and his colleagues looked at giving aspirin to prevent the udder diseases that cows are prone to experience during the dry-off period in the lactation cycle. Photo: Dr Adrian Barragan

Barragan and his colleagues at Penn State and University of Pennsylvania are now working on a series of trials that are focused on implementing this type of treatment on high-risk cows, or what Barragan likes to call ‘high-priority cows’ during the pre-partum period. In March, they received a US Department of Agriculture grant for the research.

Barragan believes the study will reveal new information on the mechanism of action of aspirin in reducing inflammation during the prepartum period by investigating the links between cow physiological parameters, inflammatory responses and the rumen microbiome.

The team also wants to identify factors that predispose cows to stress and cause inflammation. Barragan said when the funding was announced​ “we hypothesize that early therapeutic treatment with aspirin 14 days prior to expected calving date may modulate early inflammation, preventing the onset of an exacerbated inflammatory response around calving and altering the rumen microbial composition and its metabolites, which may improve cow response to dietary management changes during this period. Ultimately, we hope this will decrease the likelihood of cows developing diseases postpartum, while improving cow comfort and performance.”

Improving the Health of Newborn Calves with Probiotics