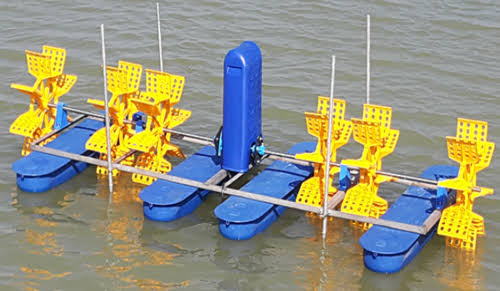 IMPORTANCE OF DISSOLVED OXYGEN IN AQUACULTURE

Aquaculture continues to be one of the fastest growing animal food producing sectors worldwide and produces 50% of food fish for human consumption (FAO, 2018). The increasing demand for food fish from aquaculture requires intensification. In intensive fish farming, feed is the main input and takes substantial share in the total production cost.

However, this super-intensive activity requires some caution, particularly with regard to water quality, which will be affected by the large quantity of food used, the large volume of excreta produced and other practices used in this type of system, and other associated problems remain inadequate management techniques, which can have impacts on aquatic environments and direct damage on production. The level of dissolved oxygen (DO) is considered to be the most critical variable in water quality. Oxygen-free water sources generally result from some type of pollution (organic or chemical). Dissolved oxygen is incorporated into the water through atmospheric air and phytoplankton photosynthesis; in general, oxygen levels of 60 to 70% saturation (above 4.5 mgL-1) are necessary for the proper performance and health of tropical fish. Tilapia is extremely tolerant to low concentrations of dissolved oxygen. These fishes can withstand oxygen levels close to zero for a few hours. However, exposure to low levels of oxygen affects growth and food conversion, even in tolerant species.

In the first part, we will talk about dissolved oxygen. This gas is essential to the survival of fish and shrimp and to the various biological processes that occur in aquatic environments. Invariably, oxygen concentration is the first factor that limits the production and survival of aquaculture animals. Hence the need to use aeration to maintain adequate oxygen levels in the water, especially in intensive crops. However, there are still producers who fail to monitor dissolved oxygen. Without adequate monitoring of oxygen levels, aeration management is ineffective. Aerators are started randomly, often at unnecessary times, resulting in increased costs, loss of animal performance and sometimes massive death of fish and shrimp due to lack of oxygen.

How to Recognize the Symptoms of Low OD Concentration in Fish ?

Fish that fall victim to low DO levels will often seem lethargic and will spend more time at the surface of the water gulping air or in front of an aerator. They might also exhibit a loss of appetite. Because larger fish require more oxygen to survive, they will die of oxygen depletion before small fish and other organisms in the same environment. They might also be quicker to display symptoms of oxygen depletion.

Aquaculturists should monitor DO levels on a routine basis using a portable or inline DO controllers, transmitters, or analyzers. By tracking changes in DO levels, you can identify when DO is getting dangerously low and make adjustments to your aquatic environment to increase the amount of oxygen present.

How to increase the DO I in water?

If your water quality monitor reveals low DO, there are a variety of things you can do to boost DO levels in your aquatic environment. They include:

Limiting feeding to reduce the amount of oxygen used

Removing dead organisms and plants that are being aerobically decomposed

If you frequently monitor DO levels, you should be able to correct for small changes without having to take more intensive measures such as replacing the water.