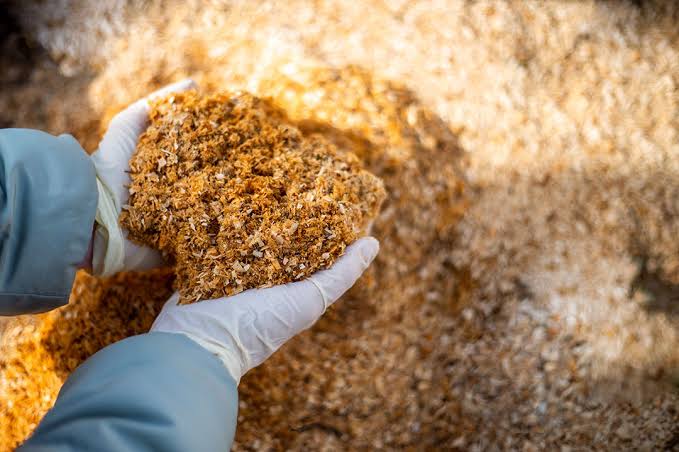 Using wood residue for animal feeding began during World War II, when there was a severe shortage of feed. The results were not promising, as the animals were not willing to eat these residues, in addition to the low digestibility values. Treating these materials has improved their digestibility and nutritional value.

The wood residues consist of complex carbohydrates whose percentage varies according to the type of trees used and their stage of growth. In general, wood residues consist mainly of cellulose (50%), hemicellulose (20-30%), and lignin (15-35%), in addition to small amounts of soluble sugars, fatty acids, alcohols, and proteins, particularly in the wood of some trees such as pine and deciduous trees in their early stages of growth.

Various chemical, biochemical, and physical treatments have been suggested to increase the digestibility of wood by animals. These treatments include:

Hydrolysis with various acids to solubilise the cellulose

Increasingly accepted is the idea that what happens in the rumen will cascade onto the whole gastrointestinal function, metabolic status, liver function and immune response, down to the mammary gland. Read more…

In one study, sawdust of pine, oak, aspen, and other tree species was included at 10% of the diet of beef steers and this delivered an equivalent performance to diets containing an equal amount of coastal Bermuda grass. However, steers fed 15% sawdust had lower liveweight gains and they consumed slightly less feed than the coastal Bermuda grass-fed animals.

In another study, oak sawdust was fed at 5% and 15% of the diet and compared with oyster shells and ground Timothy hay as roughage-based feedlot cattle diets. Performance data indicated that sawdust could be used successfully at levels up to 15% of the diet without significantly affecting performance. Coarse ground sawdust delivered better results than fine ground sawdust.

For dairy cattle, it has been shown that aspen sawdust can replace 30% of a conventional diet in dairy cows producing 20 kg of milk daily without reducing the intake of digestible dry matter or the production of milk. Cows consuming the aspen sawdust also maintained a normal milk fat level. At certain stages in the life cycle of dairy cows, the dilution of the diet with wood allowed regulation of energy intake and hence prevented unwanted fattening. In one study, grain intake was controlled by including up to 45% wood fibre with grain in the diets of dairy cows.

READ ALSO: 5 Tactics to Lower Infertility in a Cattle Farm

There are also liquid residues resulting from the manufacture of wood, either by sulphurisation to produce cellulose or by pressure with water vapour to produce wood panels. The resulting material, in this case, which is called wood molasses, consists mainly of about 65% soluble sugars, which is equivalent to the percentage of sugars found in other types of molasses such as cane, beets, or citrus molasses, thereby providing an important source of energy in animal diets. Wood molasses have been used in some experiments at 10% of the total concentrates of fattening lambs after mixing with urea. There were no significant differences in animal production in the case of feeding wood molasses or other types of molasses, such as beet molasses, with no adverse health or metabolic effects on the animal.

Although limited quantities of wood residues or sawdust may be used as a roughage factor or a diluent in ruminant diets, it is evident that most species of wood fed without chemical or physical treatment are unsatisfactory as major components in the ruminant diet. This has caused increased interest in the alteration of wood through such treatments to make it more acceptable and digestible by the ruminants.

Wood residues that have been exposed to chemical treatments should be carefully examined for the residual chemicals which adversely affect animal health and production.

Dry wood residues contain only small amounts, or may nearly be devoid, of many essential nutrients. Thus, animals consuming diets with large amounts of wood materials may encounter ill health if the diets are not properly balanced.

Most of the wood residues are relatively high in moisture, which causes problems in storage because of deterioration. Therefore, research is needed to identify low-cost means of preserving high-moisture wood residues. Preservation through ensiling and the use of mould inhibitors are approaches that might be fruitful.

What to Consider when Your Cow is Down?

How to Keep Coccidiosis from Afflicting Calves Post-weaning

5 Tactics to Lower Infertility in a Cattle Farm