Adesiji disclosed this to newsmen in Ilorin on Monday that the research effort that produced the innovation was done in collaboration with the International Institute of Tropical Agriculture (IITA), Ibadan.

He said the new maize breed has been approved for release and cultivation by farmers in the southern Guinea Savannah and rain forest ecologies of the South-Western part of Nigeria.

READ ALSO:Dear Poultry Farmers, how many ears do you have? See the scare letter on Avian Flu outbreak

The immediate past Dean of the Faculty, Prof. Gbadebo Olaoye, explained that the faculty had, in 2007, constituted a research team which composed of soil scientists and economists in collaboration with IITA to work on maize.

Olaoye further explained that all varieties of maize were treated for their yield potential, adaptation and quality and the research team was sub-divided into three zones in the country and that Unilorin handles the southern Savannah and the rain forest.

In his words, “the Unilorin research team tested for varieties in its allotted zone and anyone adapted, is the one to be used’’.

“The yellow grained maize variety was one of the nine maize varieties that were termed open-pollinated and hybrids. These have been approved for release and cultivation by farmers in different agro-ecologies of Nigeria by the National Variety Release Committee (NVRC).

“This was approved through the National Committee of the Naming, Registration and Release of Crop Varieties, Livestock Breeds and Fisheries at a meeting recently held,’’ he added.

He assured farmers that the grains would be readily available to them during the 2021 growing season.

The variety of the maize is an open-pollinated, which give a poor farmer the opportunity to plant and also harvest the maize and be able to plant it the next planting season. 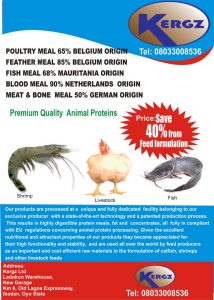 Previous articleNigerian Company, Brazilian Institute Partnered to Set up Centre for Animal Husbandry
Next article[ACT NOW] See how to keep the deadly Avian Influenza from your farm Part 4