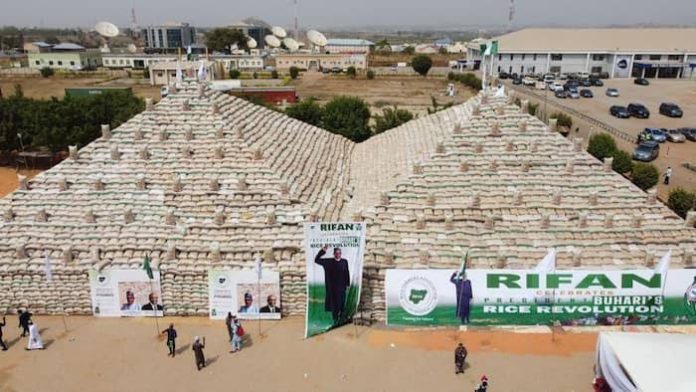 Media reports have revealed that millers in the country have resumed the importation of rice from neighbouring countries to meet operation demands This is coming three months after President Muhammdu Buhari unveiled the tallest rice pyramids in Africa in a fanfare ceremony in Abuja CBN currently has a ban on rice importation and has pumped billions to farmers to improve production.  According to various reports, it seems the road to rice self-sufficiency for Nigeria is still very far as, despite increased production, it is not enough to meet demands.

BusinessDay reported that Nigerian rice millers have said they are importing paddy from some neighbouring West African countries to keep their mills running. A development that runs counter to the claim by the Federal Government that the country has achieved self-sufficiency in the production of the grain.

READ ALSO: How to Improve Fish Farming Efficiency and Productivity

Recall that on January 18, President Muhammadu Buhari unveiled 13 rice pyramids stacked with a total of about 1.2 million bags of paddy, which was described as the largest in the World.

BusinessDay report noted that the inability of some rice millers to get enough paddies had forced them to import from neighbouring countries. According to the Guardian, Nigerians consume 6.95 (almost 7.0) million metric tonnes of Rice but total production is at 5.000MMTs leaving a deficit of approximately 2.00 million metric tonnes.

To close the gap, the report noted that millers were forced to smuggle rice into the country due to the importation ban of CBN. Cost of Rice This huge gap means the effort by CBN in committing billions of Naira to the hands of farmers through the Anchor Borrowers’ Programme (ABP) is yet to have the required effect. READ ALSO It is his second house: Father of 3 who won sports jackpot of N826m builds a luxury mansion in his village A recent market survey carried out by Legit.ng shows the cost price of rice of a foreign rice bag sells at N30,000, while a bag of local rice (stone-free) sells from 27,000 upwards and the ones with stone from, N24,000.