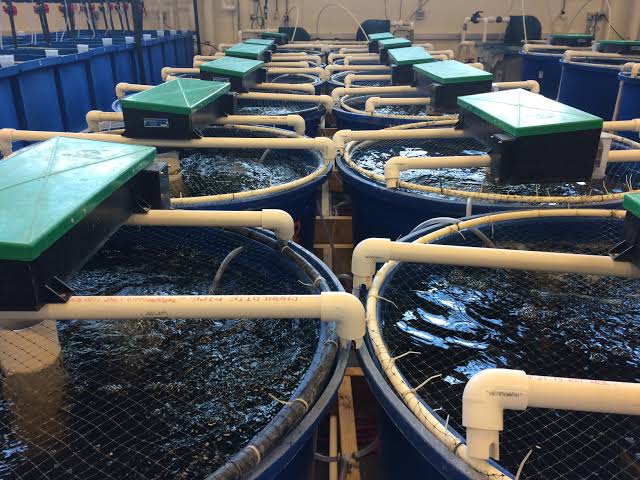 Ensuring optimum water quality parameters is the biggest challenge for ensuring the smooth running of a recirculating aquaculture system (RAS).

Algal cells attached to a biofloc

Having designed and operated a wide range of RAS over the last three decades – most recently a novel system in Panama which produces both shrimp and tilapia – I’m keen to share the key factors that need to be taken into consideration with readers of The Fish Site. I hope you can learn from the following tips.

The basics of understanding water quality in RAS involve maintaining variables within ranges that promote growth while preventing disease of the cultured animal. Routine analysis of water quality typically includes measuring dissolved oxygen many times during the day and evening while various forms of nitrogen may need to be measured daily or weekly, depending on the intensity of feeding.

One of the most important rules that needs to be addressed when discussing water quality in RAS is that toxic nitrogen accumulation as well as aeration requirements are based on feed amounts that are placed in the RAS and not the harvestable biomass. For example, minor amounts of feed at a low rate of 2g per cubic meter of water (2g/m3) would not likely need any aeration to provide oxygen or biofiltration to handle toxic nitrogen, while feed rates increasing up to more than 200 g/m3/day in clear water and algae-based systems would require high rates of aeration, biofiltration and solids removal which can be accomplished through high rates of recirculation through various RAS components.

In contrast, biofloc systems incorporate waste nitrogen and solids into flocs by manipulating the carbon to nitrogen ratio in culture water. The flocs are then consumed by omnivore species that can tolerate high solids, such as tilapia and shrimp. Bioflocs are feathery, floating particulate solids that are colonised by a variety of bacteria and algae. Typical bioflocs can reach up to 40 ml/L as measured in an Imhoff cone as feed levels increase, but are typically maintained at a level between 10-20 ml/L.

Perhaps the easiest way to avoid having problems with any water quality variable is to just exchange water, discharging nutrient-rich waste and carbon dioxide into adjacent waterways and bringing in water, free of any oxygen demand and waste nitrogen. Suggested recommendations to maintain water quality through water exchange are about 10 percent per tank or pond volume exchanged throughout the day. However, losses from disease in aquaculture cost the industry billions of dollars per year due to disease transfer through water exchange – as water enters aquaculture systems as infected tissue from other farms.

In addition, sensitive coastal environments are often damaged due to aquaculture water discharged with a high solids content and high biological oxygen demand, which can suffocate sessile organisms like clams and oysters. These are only some of the reasons why zero water exchange RAS systems are currently gaining popularity.

The easiest variable to understand and manipulate when discussing water quality in RAS is temperature. The ideal temperature for any cultured animal is generally considered to be the figure that produces the fastest growth while promoting the healthiest environment. The closer to the ideal temperature for a cultured animal, the more productive and economically viable a RAS system can be. Allowing a higher temperature than what would be considered ideal is detrimental to the economic and biological efficiency of an RAS system – as the colder the water is, the more oxygen it can hold. Oxygen is the most dynamic of all variables and the one that is most important to measure and maintain within a certain range in an RAS.

There are various aeration systems that can be utilized to supply oxygen for an RAS system, depending on the size and the species you are growing. Aerators provide three necessary functions: increasing dissolved oxygen,mixing the culture waterdiffusing carbon dioxide from the water into the atmosphere.

Due to differences in designs, aerators have pros and cons that make them amenable to various RAS systems. Aspirator pump aerators, or any aeration device that employs a venturi, are the most efficient oxygen transfer aeration devices that can be used for any aquaculture system, especially in saltwater. However, they are not very good at releasing carbon dioxide from water into the atmosphere due to lower turbulence.

Meanwhile, vertical pump aerators are much more efficient at removing carbon dioxide as they have greater air to water contact, but they are less efficient at oxygen transfer into water. Diffused aeration or using air pumps with air stones or other such devices are rated the lowest in their ability to transfer oxygen into water while also being very poor at removing carbon dioxide as well.

In some instances, a combination of aerators may be the most optimal, with some being better at oxygen transfer and others better at mixing and diffusing carbon dioxide from the water into the atmosphere. Oxygen injection is not regularly used in RAS facilities unless the harvest biomass is in excess of 50 kg/m3.

This is due to the expense and need for turbulence or separate devices in order to release carbon dioxide from culture water. However, pure oxygen may be beneficial to use in lower biomass systems on an emergency basis. Within the past decade, inexpensive oxygen meters have become available that are accurate within 10 percent of the actual value but are not as durable as more expensive models.

The dangers of carbon dioxide

There are tests and meters available to measure CO2, as well as equations that will yield carbon dioxide levels once the pH and alkalinity are known. Adequate aeration, creating turbulence, or increasing air-to-water contact, will continually remove carbon dioxide to keep it within limits.

So with proper aeration and adequate turbulence that maintain good dissolved oxygen levels, carbon dioxide is generally kept in check in RAS facilities that have moderate biomass (<5 kg/m3). Maintaining adequate alkalinity (50-400 mg/L) through the addition of sodium bicarbonate or calcium hydroxide can help to limit the lowering of pH through the increase in carbon dioxide. With adequate alkalinity and carbon dioxide kept in check, the pH range is typically between 7 and 8.4 which is acceptable to most aquaculture species.

One of the biggest concerns in the design and operation of RAS is toxic nitrogen, which takes three basic forms. The first waste product resulting from nitrogen metabolism, or the breakdown of protein, is ammonia. Ammonia takes two forms in water: a unionized form (NH3), which is toxic, and an ionized form (NH4+), which is non-toxic. At a lower pH there is more of the ionized form of ammonia and less unionized form.

This relationship between pH and ammonia may be the second most important concept to understand in aquaculture production. As the pH increases, the percentage of unionized ammonia increases with sometimes dramatic results. For instance, if an aquaculture manager were to increase the pH by adding a highly alkaline compound such as calcium hydroxide, the fraction of toxic ammonia present in culture water may easily increase by as much as 50 percent, possibly creating mortalities. The upper limit for unionized ammonia in RAS systems has been reported to be less than 0.05 mg/L.

Nitrite is the second form of nitrogen formed from ammonia by autotrophic and heterotrophic bacteria. It is toxic to nearly all life and can be transformed by very few bacteria to the nitrate form, which is far less toxic. The upper safe limit for nitrite is less than 2 mg/L for species like shrimp and tilapia, while it has to be near zero for more sensitive species such as trout. By increasing the surface area available in a RAS, autotrophic bacteria can increase in number and transform ammonia into nitrite and then less toxic nitrate. Rotating biomedia is a readily available and reliable biofilter for nitrogen transformation. Nitrate is the end product of aerobic toxic nitrogen transformation and requires water exchange or an anaerobic treatment process to remove it as nitrogen gas back into the atmosphere. The upper limit to prevent toxicity for shrimp would be <200 mg/L, according to my experience, while trout generally need less than 10 percent of that value on a long-term basis. Fortunately, there are inexpensive and reliable test kits readily available to measure all forms of toxic nitrogen.

Waste solids accumulating in aquaculture systems can be a benefit in terms of providing nutrition in the case of detritivores like shrimp and tilapia, yet solids can also be a problem to more sensitive species such as trout and salmon. About 50 percent of all the feed delivered to an RAS ends up as waste solids in culture water. Solids that settle to the bottom of a container without any water movement within about 30 minutes are simply termed settleable solids while finer particles that don’t settle easily are known as suspended solids. Typically, shrimp can take up to 400 mg/L of suspended solids and 10-50 ml per litre of settleable solids while trout will not tolerate suspended solids above 20 mg/L and no settleable solids for any length of time. Solids can be maintained through simple gravity settling or through more complex mechanical means such as a rotating drum or sand filter and various cylindrical containers that use centripetal force for solids separation and collection.

Understanding water quality in RAS requires mastering the use of a certain number of variables so that they can be maintained in ranges that produce the highest amount of growth and the best environment to prevent disease. An advanced interpretation of the interaction of variables, such as CO2, pH and ammonia is essential so that problems with aquaculture production can be avoided when biomass increases in RAS, especially those that do not have any water exchange

Top 10 Basic Tips for Shrimp Farming (You Should This)

IMPORTANT CRITERIA FOR CHOOSING THE BEST AQUAFEED FOR AQUACULTURE