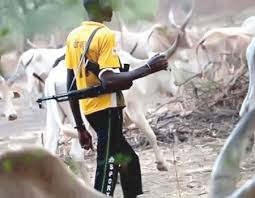 1. See what happened to two farmers who resisted Fulani men and their cows

It was gathered that the herders attacked the farmers with cutlasses when they attempted to drive the cows out of their farm.

The Chairman of Wukari Local Government Council, Daniel Adi, who confirmed the incident to PUNCH, said two of the herders have been arrested.

READ ALSO: See What the Lagos State Butchers Association is up to now

According to him, the incident happened when herdsmen invaded a farmland and their cows started eating up the crops. He said when the farmers attempted to drive the cows out of the farm, the herdsmen allegedly brought out cutlasses and cut two of the farmers.

Adi said that the injured farmers were rushed to Wukari General Hospital, where they are receiving treatment.

“On getting the report, I quickly mobilised security men and went to the area and two of the attackers were arrested. I want to appeal to the people of Wukari to hold their peace and allow security personnel to do their work,” he added.

Two hunters were said to have been killed by suspected herdsmen in Okun-Owa, Odogbolu Local Government Area of Ogun State.

Residents of the community said they discovered the bodies of the slain hunters in Oko-Agerige.

DAILY POST reports that leaders of the community have written a letter to Okun-Owa, urging him to save their souls.

According to Asiwaju Sina Ogunbambo, the leader of the community, the hunters were killed by herdsmen.

Ogunbambo said they were declared missing on Saturday after they failed to return home a night they embarked on hunting.

For enquiries and details, call World Farmers Centre Admin on 08035219966 or WhatsApp us @+2348173030321.
Previous articleHow To Quickly Take Your Farming Business To The Next Level Now
Next articleAGRIC JOB VACANCIES batch 45 – urgent