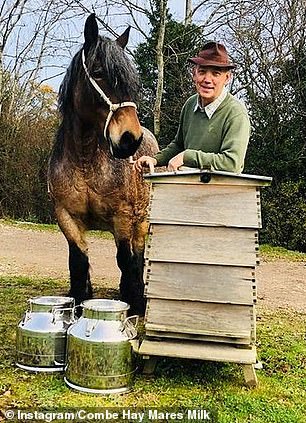 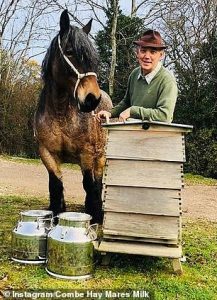 See how Farmer who runs stables at celebrity hotspot Soho Farmhouse become first British producer of HORSE MILK – and sells it for £6.50 a bottle to health conscious customers

Horse milk has been a staple of Central Asian cuisine for centuries but now one farmer wants to introduce the drink to Britons.

Frank Shellard, 62, owns family farm Combe Hay, Somerset, and sells the mare’s milk, as it is also known, of his 14 horses.

Each individual 250ml bottle sells for £6.50 and Mr Shellard said the health benefits of the drink have seen his customer base expand rapidly in the past few years.

The farm now sells to 150 people, with an increase in health and environmental consciousness causing a surge in demand.

But Mr Shellard, who also runs the stables at celebrity hotspot Soho Farmhouse in the Cotswolds, admitted that trading standards were initially ‘taken aback’ when he suggested he wanted to start selling the product.

And he said he still faces the challenge of changing people’s minds to accept sweet-tasting horse milk as a mainstream drink.

He told The Times: ‘It’s turning people round to it, that is the challenge.

‘Change is hard for people and I would say if you had 100 people, I think 85 would probably pull back.

‘But the only reason cow’s milk is so popular is because of marketing.’

Mr Shellard got into the business when he heard about the milk’s supposed health benefits while working in Belgium.

He now drinks a litre of it a day and swears by the healing effects it has had on his daughter’s and granddaughters eczema.

The milk is low in fat and high in vitamin C, with more similar levels of casein and _ to human milk than seen in traditional dairy products.

And last year researchers from Nazarbayev University in Khazakstand, where the drink is hugely popular, said horse milk can help reduce the risk of developing cancer.

The study suggests horse milk is higher in albumin — a protein easily absorbed by humans — compared to cow’s milk.

These proteins can help control blood pressure and have anti-inflammatory effects, researchers say.

They suggested that mare’s milk could therefore be used in treating inflammatory diseases, while it could also reduce the risk of cancer as it has the protein casein, which is toxic to breast cancer cells.

Professor Almagul Kushugulova, leading researcher at Nazarbayev University’s laboratory of human microbiome and longevity, told The Times: ‘Mare’s milk has been consumed throughout Kazakhstan and Central Asia since horses were first domesticated and it is one of the most beneficial animal fats.

‘Also, due to its rich composition of enzymes, it stimulates the growth of beneficial bacteria and limits to growth of unwanted bacteria in our guts.’

It’s also been suggested children who are allergic to cow’s milk can drink mare’s milk without having a similar reaction.