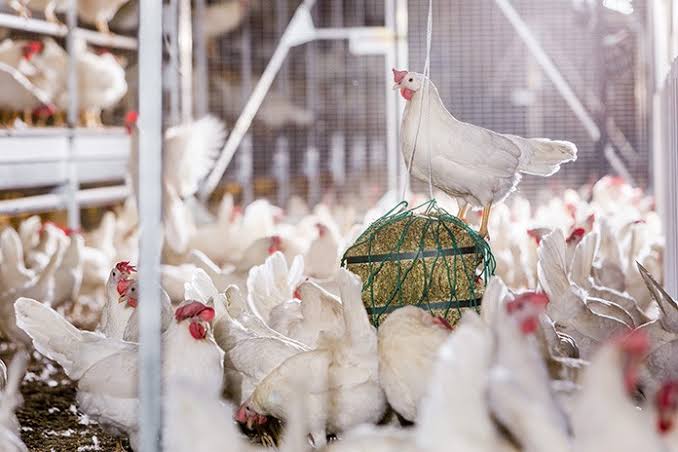 In general, there are four major types of stress in poultry production: technological, environmental, nutritional and internal stresses. Growing body of evidence indicates that most of stresses in poultry production at the cellular level are associated with oxidative stress due to excess of free radical production or inadequate antioxidant protection.

Therefore, dietary antioxidants are considered to be the main protective means to deal with various stresses in poultry production. Indeed, the development of the effective antioxidant solutions to decrease negative consequences of commercially-relevant stresses is an important task for poultry scientists. One of such approaches is based on possibilities of modulation of vitagenes, a family of genes responsible for animal/poultry adaptation to stress. The new concept of fighting stresses is based on an idea that supplying birds with various antioxidants via the drinking water could help them to effectively deal with stress conditions. In fact, it was proven that inclusion of vitagene-regulating compounds (carnitine, betaine, vitamin E, etc.) in water, as well as some minerals, vitamins, electrolytes and organic acids could be effective in fighting various stresses.

Commercial poultry production is associated with various kinds of stress leading to a decrease in performance. A list of commercially-relevant stress factors in poultry production could be quite long, but the main point is the most of the stresses suppress reproductive performance of parent birds including reduced fertility and hatchability. Furthermore, stress is associated with impaired feed conversion, reduced average daily weight gain, immunosuppression and increased mortality in growing birds. Growing body of evidence indicates that most of stresses in poultry production at the cellular level are associated with oxidative stress due to excess of free radical production or inadequate antioxidant protection. According to the recent literature review, heat and diet are among main means causing oxidative stress in domestic birds that may lead to biological damage, serious health disorders, lower growth rates, and, hence, economic losses. Dietary antioxidants are considered an efficient tool to deal with stress in poultry production.

Antioxidant systems of the body

During evolution, living organisms have developed specific antioxidant protective mechanisms to deal with ROS and RNS. Therefore it is only the presence of natural antioxidants in living organisms which enable them to survive in an oxygen-rich environment. The general term “antioxidant systems” describes these mechanisms, which are diverse and responsible for the protection of cells from the actions of free radicals. These systems include: natural fat-soluble antioxidants (vitamins A, E, carotenoids, ubiquinones, etc.); water-soluble antioxidants (ascorbic acid, uric acid, carnitine, betaine, taurine, etc.); antioxidant enzymes: glutathione peroxidase (GSH- Px), catalase (CAT) and superoxide dismutase (SOD); thiol redox system consisting of the glutathione system (glutathione/glutathione reductase/glutaredoxin/glutathione peroxidase and a thioredoxin system (thioredoxin/thioredoxin peroxidase/ thioredoxin reductase). The protective antioxidant compounds are located in organelles, subcellular compartments or the extracellular space enabling maximum cellular protection to occur. The antioxidant system of the body is responsible for prevention of damaging effects of free radicals in stress conditions. Therefore, dietary supplementation of antioxidant compounds is a way to improve efficiency of poultry production in commercial conditions associated with various stresses. Dietary-derived antioxidants related to poultry nutrition can be divided into several groups:

Vitamin E – main chain-breaking antioxidant in the cell, located in biological membranes and proven to be effective in antioxidant protection. The main reason for vitamin E dietary supplementation for poultry and farm animals is to maintain their optimal health and high productive and reproductive performances. It includes positive effects of vitamin E on male and female reproduction, immunocompetence, effective growth and development, high quality of eggs and meat, decreased negative consequences of various stresses. Extensive research and wide commercial application for a number of years clearly shows essentiality of vitamin E in animal/poultry nutrition. Recently it has been shown that vitamin E recycling in the cell is key for its antioxidant activity. Ascorbic acid, selenium, vitamins B1 and B2 are important elements of vitamin E recycling. Therefore, if recycling is effective, even a low vitamin E concentration, for example in the embryonic brain, can prevent lipid peroxidation in vivo. Dietary vitamin E supplementation is an important part of poultry nutrition. The main source of vitamin E for poultry is a premix providing the vitamin usually in excess of dietary requirement. There is a range of anti-stress premixes with an increased vitamin E content. After 90 years of extensive research in the field of vitamin E its unique role in biological systems is greatly appreciated in maintaining growth, development and general health of humans and animals.

Selenium – an integral part of 25 selenoproteins participating in various antioxidant reactions in the body. It is supplied with the diet in various forms and optimal Se status is a key for effective antioxidant protection. It has been shown that organic Se in the form of Selenomethionine (SeMet) is the Se form of choice for poultry breeders. Generally speaking, there are two major Se sources for poultry, namely inorganic selenium (mainly selenite or selenate) and organic selenium in the form of selenomethionine (SeMet; mainly as Se-Yeast or SeMet preparations). Advantages of organic Se in poultry nutrition have been shown and Se-Yeast receive a lot of attention as an effective source of organic selenium in poultry/farm animal nutrition. However, it seems likely that the level of SeMet in the yeast is the major determinant of its value as a Se source. That value is nevertheless still variable (usually in a range 50%~70%) and it is a difficult task to stabilize and guarantee it at the level of production of Se-Yeast. Pure SeMet has some problems related to its stability and therefore an introduction of the new stable supplemental form of Se (Seleno-hydroxy-methionine) could be considered as a next step in improving Se nutrition of poultry.

Carotenoids – important elements of the antioxidant system, possessing antioxidant activities and participating directly or indirectly (for example, by recycling vitamin E or regulating expression of various genes) in antioxidant defenses. There are more than 750 carotenoids in nature and their efficiency varies considerably. Recently, an important role of canthaxanthin in breeder nutrition has been described. Indeed, there is a growing evidence indicating that canthaxanthin has a special role in antioxidant defense of the developing embryo and its dietary supplementation of the breeder’s diet is a way of improving hatchability.

Vitamin C (ascorbic acid) – an important antioxidant synthesized in chickens. Its dietary supplementation is shown to be effective only in stress conditions, when its requirement substantially increases. The role of vitamin C in vitamin E recycling is a topic of great interest.

Polyphenolic compounds – a group of various plant-derived compounds comprising more than 8,000 various compounds possessing antioxidant and pro-oxidant properties in various conditions. The main problem with polyphenols, including flavonoids, is their low bio-availability. Their concentration in the diet could be very high, but their levels in blood is low and their concentration in target tissues (liver, muscles, egg yolk) usually is negligible. Therefore, the main site of flavonoid action is the gut where they can have health-promoting properties by participating in maintaining antioxidant-pro-oxidant balance. Emerging findings suggest a large number of potential mechanisms of action of polyphenols in preventing disease, which may be beyond their conventional antioxidant activities. Therefore, it seems likely that antioxidant activity is not a major mechanism for possible beneficial effects of flavonoids in poultry nutrition. Indeed there is a shift in polyphenol-related research from testing their antioxidant activities in vitro to deeper understanding their molecular mechanisms of action including cell-signalling and gene expression. In particular, silymarin (SM), an extract from the Silybum marianum (milk thistle) plant containing various flavonolignans (with silybin being the major one), has received a tremendous amount of attention over the last decade as a herbal remedy for liver treatment. In fact, SM has been the gold standard drug to treat liver disorders of different aetiologies and milk thistle extracts have been used as traditional herbal remedies (liver tonics) for almost 2000 years. Indeed, protective roles of silymarin in poultry production deserves more attention.

Carnitine is an important element of the antioxidant system of the body and it has positive effects on chickens when added to the feed or supplemented via water. In fact, carnitine could be considered a new type of antioxidant, regulating the mitochondria, a major site of free radical production. Effects of carnitine on vitagene expression deserves more attention. Carnitine also has immunomodulating properties in chickens and needs further investigation. Indeed, carnitine is synthesized in animals, including chickens, however, in stress conditions its synthesis is most likely not sufficient and there is a need for its supplementation. In general, carnitine supplementation via drinking water is considered an effective means of improving carnitine status of the birds and their performance.

Betaine is another new entrant into the antioxidant family participating in osmotic balance regulation. It seems likely that as a source of methyl groups in the body betaine plays important roles in many physiological processes related to stress biology.