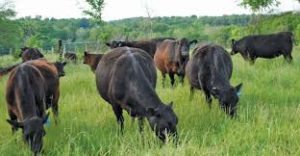 Speaker of Ogun State House of Assembly, Olakunle Oluomo, says plans are underway to legislate on animal husbandry and related activities through the enactment of an all-inclusive law on anti-open grazing in the State.

The speaker said the law was to put in place measures towards stemming the incessant herders/farmers clashes in the State.

Oluomo said this during a parley with executive members of the State Coalition of Civil Societies led by its Chairman, Yinka Folarin at the Assembly Complex, Oke-Mosan, Abeokuta.

The speaker recalled that stakeholders, including some northern leaders, had openly condemned “the uncontrolled wandering of cattle”, which had resulted in series of attacks and criminal activities associated with herdsmen/farmers’ clashes across the State, especially in the Yewa axis.

He noted that the Assembly had equally finalised plans to engage relevant stakeholders through public hearings to put in place laws for the creation of an agency for the collection and maintenance of database for all residents in the State.

He added that collection of database would afford a verifiable details and bio-data to improve on security operations of residents across the State.

He outlined the efforts of the ninth assembly towards addressing insecurity in the state to include, speedy passage of the State Security Network Operations code-named Operation Amotekun, as well as the State Security Trust Funds and other advisory resolutions to the executive arm

Oluomo assured that the assembly was irrevocably committed towards ensuring the attainment of peaceful co-existence and economic prosperity.

‌
He said the assembly “would continue to partner with civil societies and professional bodies amongst others to further harness their views and submissions to curb the menace of insecurity in the State.

“We are already liaising with the executive arm to secure their commitment for the speedy assent of the bills within a reasonable time.”

Earlier in his presentation, Folarin applauded the leadership of the assembly for the passage of people-oriented legislations.

Folarin acknowledging that the assembly had been working relentlessly towards putting in place more legislations to address issues of insecurity including kidnappings and cult clashes amongst others.


Post Views:
586
Previous articleHow To Use Your Cellphone To Make More Money In Farming
Next articleSee the letter from CAC disclaiming scam on Companies, Business names and Incorporated trustees