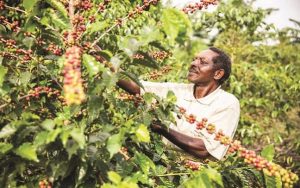 Coffee is a source of livelihood for more than 12 million households in Africa, says the Centre for Agriculture and Bioscience International (CABI), a United Kingdom-based organisation.

Over 38 percent  of the population of Burundi, 23 per cent of  Tanzania, 22 per cent of Uganda, 17 per cent of Côte d’Ivoire and 14 per of Ethiopia, for example, depend on coffee farming. However, Nigeria has not been recognised since the crop production has, for over two decades, been on a downward spiral.

The global market for coffee shops is projected to reach $237.6 billion by 2025, according to ResearchAndMarkets.com. Also, coffee shops are going to become icons of urban neigbhourhoods. Globally, agro entrepreneurs are pushing for increased domestic coffee consumption.

Driving the product in Nigeria is the Chief Executive, Happy Coffee Nigeria, Princess Adeyinka Tekenah, whose mission is to ensure that Nigerians have access to local coffee.

In 2015, miffed that though Nigeria grew coffee, people were drinking imported products, she launched Happy Coffee, an indigenous coffee brand.

From the pop-up café, the company started bagging its house blend, which is freshly roast coffee from farmers. She is among a new breed of entrepreneurs hoping to cash in on coffee. They are betting that wealthy Nigerians will cultivate a cafe culture that can also spur consumption of local crops.She is supporting research across the industry supply chain, from the farm to production.

Princess Tekenah sees the next wave of growth in the international coffee industry coming from Nigeria and wants to play a role in driving the growth. She  has been part of a comprehensive stakeholder consultation study to understand the problems of coffee industry and also to find ways and means to get coffee farmers out of deep distress and debt.

READ ALSO: See what happened to WAKILI the troubler of farmers

But there is no one super bullet that can kill the pain of coffee farmers, because the challenges they face are too many.

While coffee has the potential of a key priority agricultural commodity in Nigeria, there aren’t many policies to support the development of the sector.

At present, spending on coffee, according to Fitch Solutions, is 2.5 percent, compared to tea or cocoa, which are forecast to account for close to 40 per cent of Nigeria’s non-alcoholic drink spending by 2023.

According to it, consumer coffee spend for Nigeria is set to hit $286.8million in 2023 Despite this, farmers are not tapping the potential as the produce has seen a significant dip in production and export.

There are two coffee varieties in Nigeria – Arabica and Robusta. Arabica is grown on the Mambilla,Taraba State; Jos, Plateau State and Obudu in Cross Rivers State.

Despite lack of data, Princess Tekenah claimed that many farmers were involved in its cultivation. Therefore, improving the coffee sector could have a positive impact on development as well as the socio-economic conditions of vulnerable small farmers whose income are dependent on the crop.

In collaboration with AFEX Commodities Exchange Limited (AFEX), a private commodities exchange firm, Princess Tekenah said her company was establishing a data platform to help coffee farmers. Also, she claimed that the High Commissioner of Uganda in Nigeria Ambassador Nelson Ocheger had promised to support the sector with expertise.

Princess Tekenah said a bill for an act to establish National Tea and Coffee Development Council had passed second reading at the Senate.

The bill, sponsored by Yusuf Yusuf (APC Taraba Central), seeks to promote growth, production and marketing of tea and coffee. If passed into law, it would enhance the rapid diversification of the sector.

To boost competitiveness, she suggested that the government had to develop a master plan to revitalise the sector.

He advocated that the government, work alongside farmers on training – from agricultural practices and farm renovation to post-harvest techniques.

This, he said, would help farmers to achieve higher yields and quality standards that would open up opportunities for them to secure premiums from certification and specialty markets, while lowering their production costs.

Oba Thompson, who has been working  with  international partners to explore ways for farmers to bring in higher returns, said though Nigeria produced some of the most valuable specialty coffees, farmers got only a small share of the profits.

He saw a similar thing in the cocoa sector. Since then, he has provided a springboard for farmers to get better prices for raw beans, learn about branding and consumer marketing, and develop business partnerships in foreign markets.

He said there was the possibility for producers to sell their coffee as the market remain untapped, stressing that many farmers were supplying high-quality arabica coffee. According to him, the  geography of Nigeria is ideal for coffee cultivation. In the Southwest, coffee and cocoa represent two of the most important value chains, where they are grown by more than 10,000 farmers and support thousands of jobs.

Nevertheless, the stock of coffee trees is aging and, coupled with a changing climate, farms’ productivity are threatened with increased risk of devastating crop diseases.

The National President, All Farmers Association of Nigeria (AFAN), Kabir Ibrahim, would not want the situation to deter producers and investors.

Ibrahim noted that Nigeria’s coffee was highly appreciated in the global market and that a significant number of opportunities existed for farmers to maximise benefits from the sector, not only in production but at the downstream stages.

With a growing demand for quality, he said encouraging private investment in the industry could lead to the expansion of large-scale commercial plantations and improved quality and productivity.

He hinted that investors were coming in, including Starbucks Inc, associated with the highest quality coffees.

Starbucks has been working with farmers worldwide to produce high-quality coffee beans.

A senior expert with the Cocoa Research Institute of Nigeria (CRIN), Dr. Busayo Solomon Famuyiwa, said the coffee industry needed to experience a resurgence after decades of stagnation. He has seen it all with more than 15 years’ experience researching coffee and other cash crops.

Although the demand for coffee has been increasing, he observed that there had been a dramatic decline in production over the past few years. The reasons, he added, included declining plantation areas, degraded soil, ageing coffee trees, lack of business attitude, knowledge and skills among coffee farmers and little adoption of best farming practices and management.

He explained that coffee production was volatile fot those reasons, noting that a lot had to be done to revitalise the sector and support and encourage coffee farmers with the best coffee agronomy practices and processing techniques.

The reviving of  the coffee industry, he  maintained, would be life-changing for smallholder farmers and CRIN was working to help train farmers in technical skills, providing hands-on lessons in the field at demonstration plots where the participants can see the impact of adopting best practices.

One of the challenges of farmers is market, Famuyiwa said, adding that the institute has solved it.

He was optimistic Nigeria could become a super exporter of coffee, if much is done to empower more farmers to follow modern practices, including use of fertiliser, pesticides and fungicides.

Though Nigeria has proved that it can produce good coffees, Famuyiwa sees farmers earning more premium prices with suitable input, rehabilitation of plantations, and better management of soil to increase the quality of produce.

While CRIN is collaborating with the government to lead an ambitious replanting programme, Famuyiwa said the need for producers to get training in orchard management. The institute had established nurseries to regenerate coffee trees and created a policy that puts farmers in touch with fair-price buyers.

Famuyiwa reiterated that the mission of  CRIN was  to grow, protect, enhance the supplies of quality coffee and improve the livelihoods of the families who produce it.

He noted that one of the biggest challenges facing coffee research was that it is a tree crop; it takes a longer time to grow a tree.

According to the Raw Material Research and Development Council (RMRDC), between 2010 and 2015, about N1.5 billion worth of coffee products were imported into the country.

Several factors have been attributed to the country’s dwindling production, the majority of which have forced farmers to abandon coffee for other crops to make ends meet.

According to analysts, most of the coffee plots are old and farmers have suspended major activities on their farms.

The Secretary-General, National Coffee/Tea Association of Nigeria (NC/TAN), Dr. Usman Hassan, said due to low prices, some farmers plucked their tea, pound it locally and dry it on the ground to sell, saying: “This is not conventional, but because of the demand for tea in Nigeria, it is still marketable.

“Why are they neglecting Nigerian farmers? Coffee/tea farming alone can employ more than 20 million people if attention is given to it. Twenty-one states, including Abuja, produce coffee in Nigeria,” he stressed.

Thousands of people in Central and West Africa are benefiting from Nestlé’s efforts to boost sustainable coffee from bean to cup. These include coffee farmers to sales people.

Nestlé agronomists visit participants’ farms and teach them how to grow coffee more sustainably. As part of the plan, by this year, the company is committed to providing farmers worldwide with over 27 million high-yielding, disease-resistant coffee plantlets, developed by the Nestlé Research and Development Centre in Abidjan.

In line with this, the Inter-African Coffee Organisation (IACO) has joined forces with the Centre for Agriculture and Biosciences International (CABI) and the International Coffee Organisation (ICO) to launch the $950 million Africa Coffee Facility (ACF) to boost Africa’s coffee industry and achieve a 40 percent increase in high-quality exports worth $5 billion yearly.

The ACF is projected to transform Africa’s coffee production – currently 10 per cent of the global coffee market – into a vibrant and resilient industry again.

Coffee contributes a significant proportion of tax income in a number of these countries.

IACO Secretary-General Dr. Fred Kawuma said: “Africa produces some of the highest-quality and much-loved coffee in the world but its contribution to the global coffee trade has declined significantly since the 1970s.

“The ACF is an ambitious fund, which seeks to attract private and public sector investment to transform Africa’s coffee industry from a subsistence to a commercial or entrepreneurial approach where millions of smallholder coffee farms will see their livelihoods significantly enhanced.‘’

The first-ever Donors and Partners Conference has been held under the theme “Financing the African coffee value chain through the Africa Coffee Facility”.