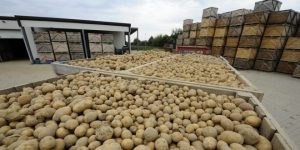 The Federal Government is to explore opportunities within the Potato Value Chain to further achieve food nutrition and security in the country, official says.

Hajia Karima Babangida, the Director of Federal Department of Agriculture, Federal Ministry of Agriculture and Rural Development, stated this at the Potato Value Chain Stakeholders’ Workshop on adoption utilisation of OFSP on Thursday in Osogbo. Babangida said that the Ministry was willing to explore all the opportunities within the value chain in furtherance of achieving food nutrition and security for the country. She said the primary objective of the workshop was to create a forum for the major actors in the potato value chain to chart a way forward for the realisation of the fullest potentials locked up in Potato Production, Processing, utilisation, and Marketing. The Director also appealed to stakeholders in the South-West region to explore profitable investment in sweet potato business for economic growth and development. Babangida, who noted that there are identifiable challenges in the potato value chain, said efforts, must be put in place to solve the challenges. “Several challenges have been identified in the potato value chain; right from the seed system protocols to the marketing of the produce.

“The challenges are quite enormous, but however, not one that is insurmountable, all hands must be on deck to achieve this feat,” Babangida said. She also called on research institutes, agencies and development partners with mandates on the potato to work assiduously in creating solutions to the numerous challenges besetting the value chain, as well as new technologies and innovations to further improve production. In his remarks, Mr Sunday Atoyebi, the State coordinator of the Ministry, said aside the wealth potentials of processing OFSP into various confectioneries such as Chin-chin, juice, among others, its health benefits could not be over emphasised. Atoyebi said it was known to have enough nutritional values to supply the vitamin A requirement for children between the ages of 6 months to 5 years, support pregnant and lactating mothers and also help boost the immune system of the elderly. He said the purpose of the workshop was to provide solutions to many challenges facing the popularisation and adoption of the OFSP among the Nigerian farmers and processors nationwide. In his remarks, the Osun Commissioner for Agriculture, Mr Adedayo Adewole, commended the Ministry for organising the stakeholders meeting in the state.