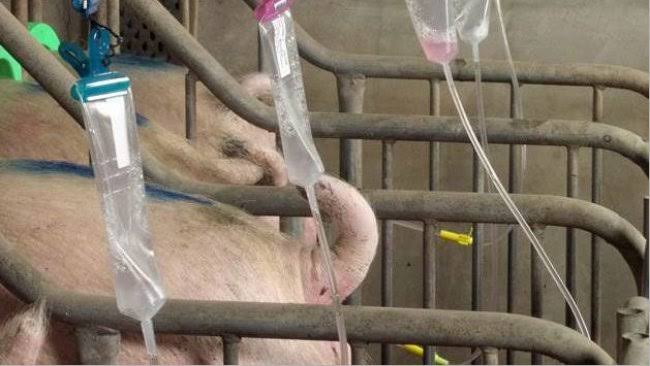 The Advantages of Using AI Breeding for Pigs

For almost as long as my husband and I have raised pigs on our farm, we have relied on AI breeding (artificial insemination) to get the job done.

Although AI is the norm when it comes to breeding beef cattle and dairy cows, it is extremely rare for other livestock, even pigs.

Most people would prefer to keep a boar to breed their sow or sows, and while that works for lots of folks, it’s simply not the right option for us.

AI breeding is a convenient way to breed your animals, especially when it comes to pigs.

That said, it’s not an imperfect technique. There are some downfalls to consider before deciding whether it’s right for you.

Here’s what you should know.

What is AI Breeding?

A colloquial term for artificial insemination, AI technology involves collecting sperm from a male animal (in this case, a boar) and then depositing them into the reproductive tract of a female (in this case, a sow or gilt).

This technology is available for just about every domestic livestock species. However, it’s most commonly used in dairy cattle.

That’s because, for many species, it is simply not worth the time and hassle involved in learning how to properly service an animal. Many people make this complaint when it comes to AI breeding pigs – I, however, see several advantages.

We had to buy a single piglet from another farmer a year or two ago (a restaurant customer decided he wanted one more hog for the summer).

We drove to the farm and were able to pick our piglet out of a litter that had just been weaned.

Next to the barn where the piglets were housed, there was a separate barn that housed the boar. This was one of my first experiences being that close to a boar. I’ll be honest, it was a little intimidating! I thought our breeding sow, Big Boo, was big – and at nearly 600 pounds, she was.

This boar, though, was another monstrosity altogether. He was absolutely massive.

While it’s not difficult to keep a boar – and managing a boar and his behaviors often comes down to selecting the right breed – it’s not something we have any interest in doing.

We have never been interested in raising a boar because it would require additional winter housing (which we don’t have) and additional feed expenses.

We’ve run the numbers, and for us, raising pigs during some of the coldest months of the year when natural foraging opportunities are limited, it is actually more expensive to keep a boar just to breed one sow than it is to buy semen and AI breed.

Of course, that factor is negated if you plan on breeding more than one sow. The expense will be spread out over many, many more piglets.

However, for many farmers who only breed one or two sows, it’s more economical to AI breed than to feed a boar during the entire year just for a few minutes of performance!

READ ALSO: Large White Pig Breed: All You Need to Know About this Bacon Producer

Our favorite part of AI breeding pigs is our ability to pinpoint the exact genetics we want to be carried in our litter of piglets. We’ve raised several breeds, including Tamworths, Durocs, Berkshires, and Yorkshires.

When you AI breed pigs, you know exactly what the genetics of a boar are. That makes it easier when it comes to managing your litter.

As a corollary note to the last point, one other thing I enjoy about AI breeding is that it makes it much easier to keep records.

When you order semen from your supplier, you will be given a paper trail to follow. This will tell you what kind of semen was ordered, when it was shipped, and when you received it.

That way, you’ll know exactly what kind of genetics you have and what dates you breed your sow or gilt.

4. Can Be Less Expensive

Though this is not true for all farmers, AI breeding pigs for us is a much less expensive option than it would be to raise a boar.

We don’t have access to free or inexpensive feed (at least not in the winter, when foraging is not an option). Also, we have limited space in which to raise pigs (just a few acres). We don’t want to dedicate more of that space to a boar year-round.

Plus, boars are extremely large – and they can be destructive due to their sheer size alone. Yet another hassle we don’t want to deal with (and another expense, to boot).

5. Can Pinpoint Date of Farrowing Easier

This year, our sow was due to farrow sometime in late September or early October. That kind of imprecision normally wouldn’t be an issue. I work from home. That means I can help my husband when it comes to detecting early signs of farrowing, like secretions, swelling, and nesting behavior.

The problem with not knowing exactly when she was going to have our piglets this year was that I, too, was pregnant – and due at the end of September.

While most sows farrow just fine on their own, ours has had a bit of a complex medical history that makes it necessary for us to be there when she delivers.

Fortunately, pigs are known for being reliable when it comes to sticking to their “due dates”. All we had to do was take a look at the dates our sow was bred to get an idea.

We knew she would have her piglets at the end of the first week in October. While we weren’t sure whether that would be on a Thursday, Friday, or Saturday, it gave us enough confidence to not have to worry about still being at the hospital with our newest little “piglet” when she did decide to go into labor.

I’m sure there are some pig farmers out there who have the ability to put a boar in with a sow and then estimate the date of farrowing to a T.

However, the reality is that unless you have surveillance cameras set up in your barns, you probably aren’t going to be able to watch them 24/7 – and to know, as my husband likes to put it, “which tooth of the saw bit her.”

It can take a few go-arounds for a sow to get pregnant, and without knowing which day that was on, you can’t estimate the date of farrowing with any sort of reliability.