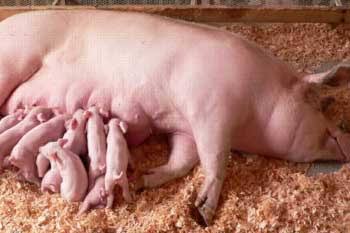 In the last decade, the focus in pig production has mainly concerned the introduction of the hyperprolific sow. With average increases in live-born piglets from 12–13 to 17–18 and in weaned piglets per cycle from 10–11 to 14–15, these huge differences mean larger economic returns for producers. But has the industry considered the necessary changes in management and nutrition required to support this tremendous growth?

Fortunately, much global research has been conducted on sow nutrition to understand and support the new hyperprolific sows in commercial conditions. Still, the genetic potential, selection process and evolution of this new sow in the next 10 years indicate that the growth in number of piglets will likely continue. This means science and applications need to catch up, and step up, to support this changing sow.

The trace mineral influence on the sow cycle

The sow cycle can be split into 5 distinct stages, all of which require different nutritional strategies to achieve the maximum number of healthy piglets per sow lifetime. They are:

Clearly, all these stages impact the number of pigs produced by a sow in her lifetime, but each to a different degree of importance. Gilt introduction is key for the future sow; mating is the start of reproduction; gestation and transition stages have the greatest potential to influence birth weight; while viability, early mortality and lactation are key aspects of piglet performance and sow durability.

Different requirements in each stage

It is obvious that a sow’s trace mineral nutrition varies along the cycle, which reflects the different requirements in each stage. Trace minerals are required for different metabolic processes for conception, mammary secretions and growth and maintenance. Although trace mineral requirements are highest during the late gestation and lactation period, supplementing continuously throughout the cycle, from the diet and minerals stored in tissue, contributes to meeting the sow’s daily nutritional needs.

3 important trace minerals for gilt and sow nutrition are zinc, copper and manganese.

Zinc is very important for maintenance and reproduction; it has a proven effect in skin and claw development and is essential for the function of many enzymes. Though lesser understood, an impact of zinc on the immunological processes and general health is acknowledged.

Any deficiency in zinc results in rough, scaly and cracked skin called parakeratosis, which can lead to loss of appetite, poor growth/development and impaired sexual development. The opposite, zinc toxicity, occurs with zinc intake at high levels and is characterised by growth depression, inflammation of the gastrointestinal tract, joint and bone problems and haemorrhages. Also, different forms of zinc influence the time and level of toxicity and the presence and level of other trace minerals such as copper and iron.

Natural zinc can be found in minor quantities in grains and plant proteins but is difficult for the sow to utilise due to complexation with phytic acid. This can be alleviated by the addition of phytase to free up the zinc pre-digestion. Higher levels of zinc can be found in raw material sources such as meat and bone meal. However, due to feed and food safety regulations these are often prohibited in sow diets. Although reproducing sows do not require much zinc, its interactions with other minerals and nutrients and its low availability from raw material sources and from natural resources can result in the sow not receiving an adequate amount. Consequently, zinc supplementation in a sow diet is essential, especially in subgroups such as gilts that are still developing and have high requirements.

Copper is involved in many processes in the body and, like zinc, is required for the function of several enzymes. The most known effect of copper is in the development of bone, connective tissue and collagen and the formation of haemoglobin. Besides these benefits, copper also supports immunity and has an antioxidant effect, acting against free radicals in the body. Its interaction with iron is very important as it enhances iron absorption from the gastrointestinal tract and mobilisation to the liver.

With copper deficiency, the animal will show reduced growth, nervous disorders, incoordination, bone abnormalities, heart issues and deficiencies in red blood cells. When too much copper is fed over an extended period, there can be impaired growth, anaemia, jaundice and eventually death. Copper toxicity can be prevented by giving extra iron and zinc.

Raw materials normally supply a fair amount of copper in sow diets, but with limited knowledge of copper requirements, particularly for hyperprolific sows and their gilts, research suggests that extra supplementation is needed. Moreover, as structural development is influenced by copper, developing foetuses and late gestation growth of the piglets in the sow require a maternal supply of copper to have adequate reserves in the liver at birth.

As manganese is likely not available from natural grain sources, it must be supplemented in all sow diets. However, manganese is also characterised as having good storage in bone and liver tissue, which lowers the daily required intake. Nevertheless, any piglet born needs its supply of manganese through its mother; therefore, it is essential to arm hyperprolific sows with a good reserve supply so as to avoid deficiencies at birth.