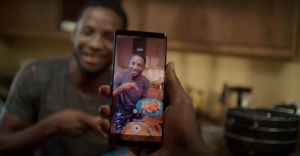 “I do not think I have ever seen a three-minute commercial without skipping it.” That was Funke Daramola’s reaction after viewing MTN’s latest TV campaign. It is that captivating!

The new TV commercial from MTN Nigeria, titled “We Move,” has received numerous reactions since its launch. We move is a common catchphrase Nigerians find themselves saying when they refuse to be held back by difficult situations, anxiety, rejection, heartbreak, and all other negative vibes that come with adulthood.

Looking closely, one can tell that this campaign was intentionally put together to highlight an issue the majority of young Nigerians are faced with. The synergy between the visual and audio production of this commercial is perhaps one of the most captivating artistic creations seen in a campaign. Without any spoken words and just a mixture of good music, expressions, and great acting, this is the most relatable TV commercial out there today.

If you haven’t seen this MTN We Move commercial, you really should go check it out. Summarily, it opens with the lead character using his culinary skills to put smiles on the faces of his friends as an undergraduate on campus. Two years later, he is seen job-hunting and being rejected at every interview he attends. Frustrated by the whole situation, he sees a dispatch rider walk in to deliver food packs at a company and that was the nudge he needed to begin his own food business.

Many Nigerian youths can relate to the storyline which speaks of rejection, hope, tenacity, creativity, and ultimately, turning one’s passion into a venture when our dream job fails to come along as envisaged.

Nigeria has one of the world’s youngest populations with a median age of 18. This implies that a sizable number of Nigerians are either fresh graduates or still in higher institutions trying to get their lives on track and make sense out of it. The unemployment rate in the country stands at 33% which is the second-highest in the world today.

Without available jobs for a large number of graduates our universities churn out yearly, the central character discovers how he can turn his hobby into a thriving business. This campaign does a great job of projecting MTN Group’s brand strategy of progress and urges the youth to look inward and explore opportunities within their current situations to achieve success regardless of roadblocks.

With MTN’s reliable and affordable data and airtime rates, they are giving everyone the opportunity to show the world what they are doing to empower themselves, and of course, gain more customers. The brand has come up with several innovations, partnerships, and sponsorships to help alleviate poverty and encourage progress.

MTN’s We Move commercial has elicited some interesting comments on social media. Samson Ayomikun praised the storyline and observed that perhaps it was time more Nigerians began to look at how they can turn their hobbies into a source of income and that it is never too late to make the shift. Some social media users got emotional while watching the commercial and Remz Marac commented, “This brought me to tears! Very brilliant, very relatable!”

Nigerians did not fail to take note of this subtle but significant issue addressed by the campaign. Many have fallen in love with this commercial because it has shifted the status quo and beliefs that women belong to the kitchen or men can’t prepare sumptuous meals. Kareem Ajala commented, “I am a man who likes to cook and it is refreshing seeing it portrayed as something that can be of economic benefit to men too.”

At the heart of most of the reactions, is an appreciation made to MTN for the commercial which now has almost a million views on YouTube. Brown Samson Dappa wrote: “This Advert was made for me, thank you MTN.” Abdul Basit described it as the best advert he has ever come across, saying, “I watch it almost every given opportunity. So inspiring. #we_move.”

The campaign further cements MTN’s position as a brand that places value on customers and connects with Nigerians by providing a platform that allows everyone to discover themselves and thrive.

RABBIT FOOD: THE BEST AND WORST FOODS TO FEED A RABBIT